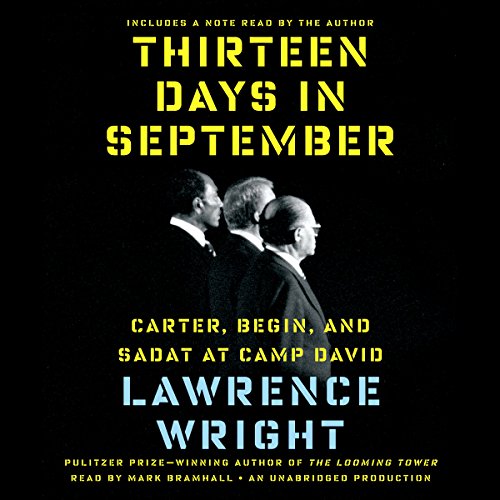 A gripping day-by-day account of the 1978 Camp David conference, when President Jimmy Carter persuaded Israeli prime minister Menachem Begin and Egyptian president Anwar Sadat to sign the first peace treaty in the modern Middle East, one which endures to this day.

With his hallmark insight into the forces at play in the Middle East and his acclaimed journalistic skill, Lawrence Wright takes us through each of the 13 days of the Camp David conference, illuminating the issues that have made the problems of the region so intractable, as well as exploring the scriptural narratives that continue to frame the conflict. In addition to his in-depth accounts of the lives of the three leaders, Wright draws vivid portraits of other fiery personalities who were present at Camp David - including Moshe Dayan, Osama el-Baz, and Zbigniew Brzezinski - as they work furiously behind the scenes. Wright also explores the significant role played by Rosalynn Carter.

What emerges is a riveting view of the making of this unexpected and so far unprecedented peace. Wright exhibits the full extent of Carter's persistence in pushing an agreement forward, the extraordinary way in which the participants at the conference - many of them lifelong enemies - attained it, and the profound difficulties inherent in the process and its outcome, not the least of which has been the still unsettled struggle between the Israelis and the Palestinians.

In Thirteen Days in September, Wright gives us a resonant work of history and reportage that provides both a timely revisiting of this important diplomatic triumph and an inside look at how peace is made.

"Wright (Going Clear), Pulitzer Prize winner and staff writer for the New Yorker, offers a thorough study of the Camp David Accords of 1978 in this meticulously researched affair, which goes beyond the core events to address a multitude of historical factors. On the surface, this is about U.S. President Jimmy Carter, Egyptian President Anwar Sadat, and Israeli Prime Minister Menachem Begin and the 13 days the men and their respective staffs spent trying to hammer out a peace treaty. Wright takes the conference day by day, detailing the clashes and compromises that marked the final results. He also delves into biblical events and the numerous conflicts following Israel’s creation in 1948. As Wright puts it, “This book is an account of how these three flawed men, strengthened but also encumbered by their faiths, managed to forge a partial and incomplete peace, an achievement that nonetheless stands as one of the great diplomatic triumphs of the twentieth century.” Alternating between biographical studies of the people involved, sociopolitical histories of the countries and faiths represented, and an almost nail-bitingly tense unfolding of the conference itself, Wright delivers an authoritative, fascinating, and relatively unbiased exploration of a pivotal period and a complicated subject." (Publishers Weekly)