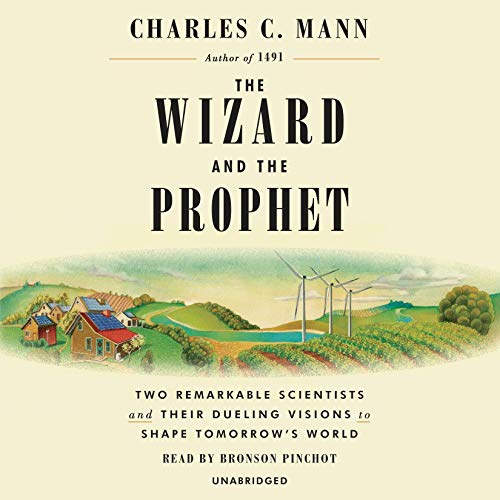 The Wizard and the Prophet

From the best-selling, award-winning author of 1491 and 1493 - an incisive portrait of the two little-known 20th-century scientists, Norman Borlaug and William Vogt, whose diametrically opposed views shaped our ideas about the environment, laying the groundwork for how people in the 21st century will choose to live in tomorrow's world.

In 40 years, Earth's population will reach 10 billion. Can our world support that? What kind of world will it be? Those answering these questions generally fall into two deeply divided groups - Wizards and Prophets, as Charles Mann calls them in this balanced, authoritative, nonpolemical new book. The Prophets, he explains, follow William Vogt, a founding environmentalist who believed that in using more than our planet has to give, our prosperity will lead us to ruin. Cut back! was his mantra. Otherwise everyone will lose! The Wizards are the heirs of Norman Borlaug, whose research, in effect, wrangled the world in service to our species to produce modern high-yield crops that then saved millions from starvation. Innovate! was Borlaug's cry. Only in that way can everyone win! Mann delves into these diverging viewpoints to assess the four great challenges humanity faces - food, water, energy, climate change - grounding each in historical context and weighing the options for the future. With our civilization on the line, the author's insightful analysis is an essential addition to the urgent conversation about how our children will fare on an increasingly crowded Earth.

“Scrupulous, stimulating, and elegant.... A beautifully crafted book. Anyone wanting a readable, relentlessly intelligent narrative showing where our environmental ideas and anxieties in the present-day Anglophone world come from will find it here in abundance.” (Robert J. Mayhew, Times Literary Supplement)

“An elegantly written, devoted testimonial to the art of the possible.” (Jonathan Hahn, Sierra)

Das sagen andere Hörer zu The Wizard and the Prophet

Every engineer should read this book

Brilliant book with a very balanced unbiased view on how to develop the world, with a clear story to help the reader soak up the dilemma and decide for himself what the right path may be.

Mann succeeds in presenting all different opinions, explaining everything he touches on in the book, giving the reader all means to for her own opinion.
The prose is enjoyable, the reader perfect.
Whether one is a hardened environmentalist, a climate change skeptic or believer in capitalism and the human endeavor, the book shows the merits of the two general approaches to the use of the planet: the conservationists prophets who warn about the need for a natural balance, conservation of habitats and the reduction of human footprint on the environment; and the wizards who believe in the human capability to use technology to increase crop yields and energy production to accommodate a growing population.