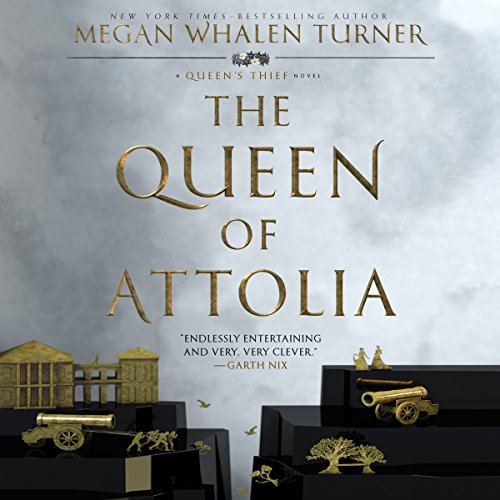 The Queen of Attolia

Discover and rediscover the world of the Queen's Thief, from the acclaimed series launch The Thief to the thrilling, 20-years-in-the-making conclusion, The Return of the Thief.

The brilliant thief Eugenides has visited the Queen of Attolia's palace one too many times, leaving small tokens and then departing unseen. When his final excursion does not go as planned, he is captured by the ruthless queen. The Queen's Thief novels have been praised by writers, critics, reviewers, and fans and have been honored with glowing reviews, "best of" citations, and numerous awards, including the Los Angeles Times Book Prize, a Newbery Honor, the Andre Norton Award shortlist, and the Mythopoeic Fantasy Award.

"Readers will be spellbound." ( Kirkus Reviews)
"Turner's storytelling is so sure that readers will want to go along with her - and discover whatever it is that Eugenides will do next." ( Publishers Weekly)
"[An] intense read...thoroughly involving and wholly satisfying on all fronts." ( The Horn Book)

WTF? Are "The Thief" and "The Queen of Attolia" really books of the same series? The beginning of the book was breathtaking but then it just went to dull politics. What really put me off was that romance. It not only made no sense at all that there should be that love but it felt downright sick to me. I loved the first book because the characters made sense and most of the were really likable in their own ways. This book had really nothing of that! It would need a trustworthy person to convince me that the rest of the series gets better. As it is "The Thief" is a great standalone and should have been left at that.
One star for deep disappointment, the second one for the thrilling start of this book. Meh. Time to re-read the Riyria series.