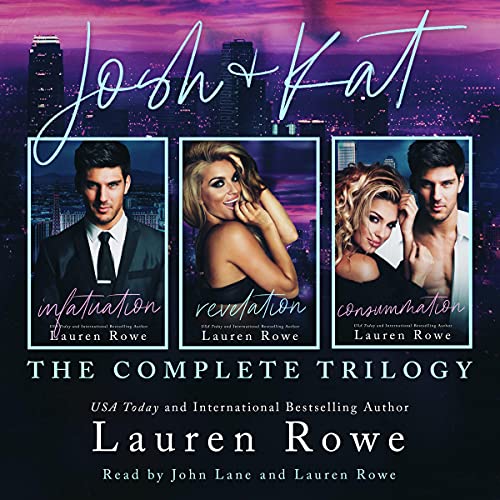 The Josh & Kat Trilogy (a bundle containing Infatuation, Revelation, and Consummation) is the sensual, laugh-out-loud funny, thrilling "origin story" of Josh Faraday and Kat Morgan, two of the most beloved characters in the Lauren Rowe universe.

It’s a war of wills between stubborn and sexy Josh Faraday and Kat Morgan. A fight to the bed. Arrogant, wealthy playboy Josh is used to getting what he wants. And what he wants is Kat Morgan.

The minute Josh Faraday meets feisty, vivacious Kat Morgan, he wants her. Not for a relationship, of course. He doesn’t do those. He wants her in his bed. But to his shock and extreme frustration, Kat won’t play by Josh’s rules like all the others. No, this stubborn woman declares she won't so much as kiss Josh until he divulges some highly personal information.... But it's something Josh has never told anyone, and won't be telling Kat. Not over his dead body, no matter how gorgeous and sexy she is.

But the chemistry between the pair is explosive, scorching hot electricity like nothing he’s felt before. Oh, God, he’s got to get a taste. He figures all he has to do is wear the sexy woman down with is patented “playboy razzle dazzle” - show her the hotness she’s missing out on and she’ll cave, like all the rest.... The only problem with that strategy? It’s Kat’s strategy, too: she plans to wear Josh down and get what she wants, too.

It’s a war of wills. A match to the bed. Who will crack first? And when they do, will either of their hearts be on the line?

The entire trilogy is bundled together here in one place. Find out why rabid fans of Lauren Rowe's white-hot, funny, heart-felt romances can't get enough!