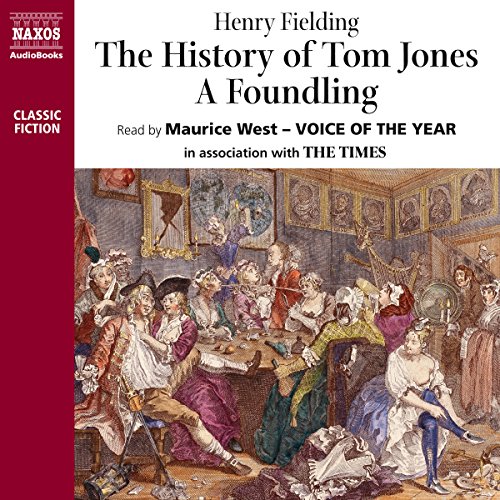 The History of Tom Jones - A Foundling

The ‘Voice of the Year’ competition introduced and sponsored by Naxos AudioBooks and The Times books pages, edited by Erica Wagner, took place in Spring 2004. Readers without any formal drama training or professional acting experience were invited to send in recordings of a short extract of either Dickens, Austen or from The Wind in the Willows by Kenneth Grahame and an own choice. The judging panel - Martin Jarvis, Juliet Stevenson, and Anton Lesser, with John Tydeman, David Timson, and Christina Hardyment (audiobook reviewer for The Times), under the chairmanship of Naxos AudioBooks’ managing director Nicolas Soames – chose the winner and finalists from nearly one thousand entries. First prize was to read a classic for Naxos AudioBooks.

The winner was Maurice West, a fifty-five-year-old English teacher from Croydon. His chosen piece was from Tom Jones and he was invited to read an extended abridgement – 6-CD set – of the same novel. ‘We were very impressed by the natural storytelling talent shown by Mr West, with a strong narrative character, a sense of period style as well as a firm grasp of the many characters who appear,’ said Nicolas Soames. After graduating from Cambridge, Mr West applied to LAMDA on the main acting course and was accepted. Unfortunately, he didn’t have sufficient funds to take up the offer and had to confine his thespian interests to amateur dramatics. Now, later in life, he has a chance to open a new thread of activity. This 6 CD recording of Tom Jones is an important addition to the eighteenth-century audio library on Naxos AudioBooks.