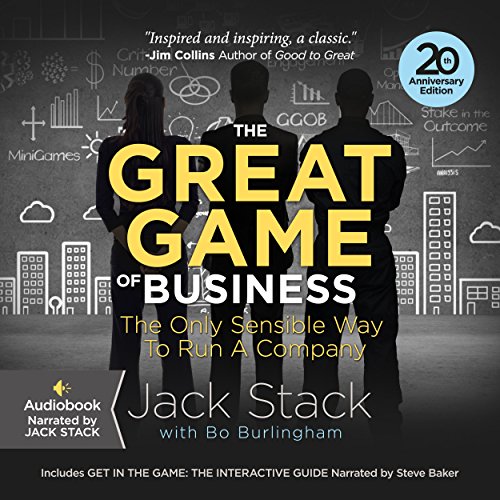 The Great Game of Business, Expanded and Updated

In the early 1980s, Springfield Remanufacturing Corporation (SRC) in Springfield, Missouri, was a near bankrupt division of International Harvester. That's when a green young manager, Jack Stack, took over and turned it around. He didn't know how to "manage" a company, but he did know about the principal, of athletic competition and democracy: keeping score, having fun, playing fair, providing choice, and having a voice.

With these principles he created his own style of management - open-book management. The key is to let everyone in on financial decisions. At SRC, everyone learns how to read a P&L - even those without a high school education know how much the toilet paper they use cuts into profits. SRC people have a piece of the action and a vote in company matters. Imagine having a vote on your bonus and on what businesses the company should be in. SRC restored the dignity of economic freedom to its people. Stack's "open-book management" is the key - a system which, as he describes it here, is literally a game, and one so simple anyone can use it.

The Great Game of Business started a business revolution by introducing the world to open-book management, a new way of running a business that created unprecedented profit and employee engagement.

The revised and updated edition of The Great Game of Business lays out an entirely different way of running a company. It wasn't dreamed up in an executive think tank or an Ivy League business school or around the conference table by big-time consultants. It was forged on the factory floors of the heartland by ordinary folks hoping to figure out how to save their jobs.

What Stack and his people created was a revolutionary approach to management that has proven itself in every industry around the world for the past 30 years - an approach that is perhaps the last, best hope for reviving the American Dream.