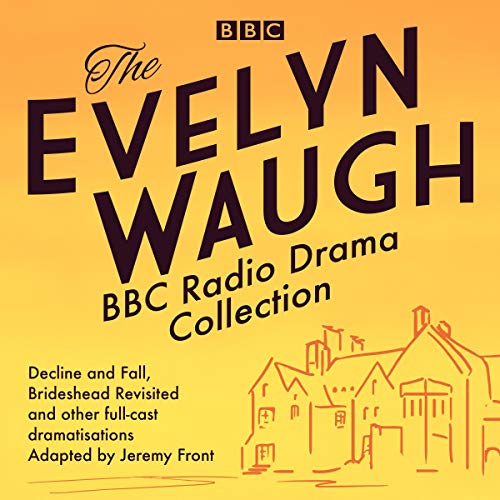 Evelyn Waugh is one of the pre-eminent English novelists of the 20th century. This collection comprises six of his finest works, dramatised by award-winning writer Jeremy Front.

Brideshead Revisited
During the Second World War, a disillusioned Captain Charles Ryder finds himself posted to Brideshead Castle: the scene of the happiest years of his life and the beginnings of his friendship with Sebastian Flyte. A classic tale of life, love and a forgotten era, starring Ben Miles, Jamie Bamber, Anne-Marie Duff and Toby Jones.

Scoop
Hapless journalist William Boot is mistakenly sent to report on a war in Africa, where he finds love and ends up in the middle of a revolution... Waugh’s celebrated satire of newspaper life stars Rory Kinnear and Tim McInnerny.

Sword of Honour (The Waugh Trilogy)
This three-part dramatisation of Waugh’s satirical masterpiece follows the comic adventures of Guy Crouchbank during World War II. In Men at Arms, Guy is scarred by a broken marriage and searching for a purpose to live. When war breaks out, he feels he may have at last found a cause worth fighting for. Officers and Gentlemen sees Guy sent home in disgrace following a misbegotten raid in Dakar. But his next posting takes him somewhere totally unexpected.... In Unconditional Surrender, Guy is beginning to lose his idealism about the war – but his military career is revived with selection for a mission to Italy.

Winner of Best Audio Drama (Adaptation) at the 2014 BBC Audio Drama Awards, this moving trilogy stars Paul Ready as Guy with Tim McInnerny as the Narrator, Tim Pigott-Smith as Brigadier Ritchie-Hook, Lee Ingleby as Trimmer and Lydia Leonard as Virginia.