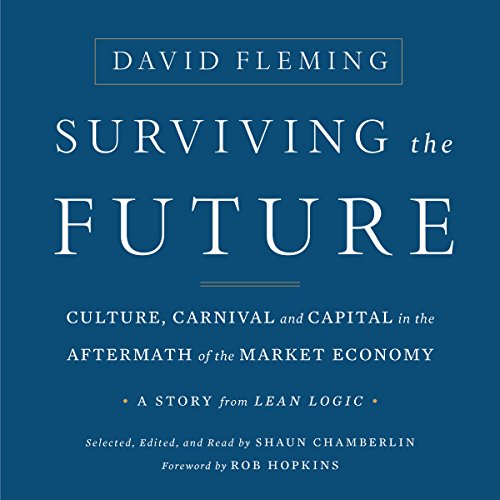 Surviving the Future: Culture, Carnival and Capital in the Aftermath of the Market Economy

Surviving the Future: Culture, Carnival and Capital in the Aftermath of the Market Economy

Surviving the Future is a story drawn from the fertile ground of the late David Fleming's extraordinary Lean Logic: A Dictionary for the Future and How to Survive It. That hardback consists of 404 interlinked dictionary entries, inviting listeners to choose their own path through its radical vision.

Recognizing that Lean Logic's sheer size and unusual structure can be daunting, Fleming's long-time collaborator Shaun Chamberlin has selected and edited one of these potential narratives to create Surviving the Future. The content, rare insights, and uniquely enjoyably writing style remain Fleming's but are presented here at a more accessible length and in conventional format.

Surviving the Future lays out a compelling and powerfully different new economics for a post-growth world. One that relies not on taut competitiveness and eternally increasing productivity - "putting the grim into reality" - but on the play, humor, conversation, and reciprocal obligations of a rich culture.

Dr. David Fleming (1940 - 2010) was a visionary thinker and writer who played significant roles in the genesis of the UK Green Party, the Transition Towns movement, and the New Economics Foundation, as well as chairing the Soil Association. He was also one of the early whistle-blowers on oil depletion and designer of the influential TEQs carbon/energy rationing system.