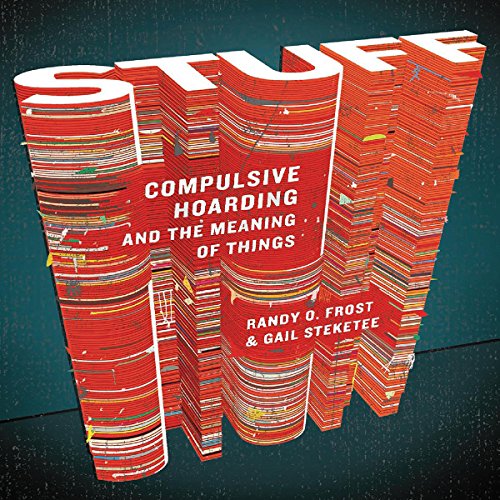 If upon first listen, Stuff sounds like a textbook for a collegiate course on Hoarding 101, well, that’s because Frost is a university professor and researcher. But don’t skip over this book — it’s the most fascinating college course you never took. Frost and his co-author Gail Steketee delve into the world of hoarding and the psychology behind the affliction by discussing case studies like Irene, a woman who has driven away her husband because she can’t let go of her stuff. It appears that Irene collects things at random — stacks of old newspapers and magazines, scraps of paper with telephone numbers, expired coupons, instructions to children’s board games. On deeper inspection, there are a number of reasons why Irene collects, like her possessions represent a connection to the outside world, or the act of collecting is a relief to her undiagnosed obsessive-compulsive disorder. While there’s no one motivation behind hoarding, Frost and Steketee posit a number of theories — and debunk some of the more common ones (like the idea that hoarders were deprived of material things as children).

Frost’s genuine and friendly tone is confident and assured — not surprisingly it’s much like that of a college professor. You can almost picture him working the slide projector as he speaks, and must fight off the urge to take notes. He’s a natural storyteller, and draws you into his scientific world without you realizing it. You just know you want to hear more.

Perhaps the most interesting aspect of this book is listeners will undoubtedly see a part of themselves in each hoarder — we all collect things to an extent: sentimental photographs, old coins, bank statements. It’s not just voyeurism, it’s learning when the line of collecting blurs into hoarding. Frost has the answers, and plenty of questions. If you like A&E’s television show Hoarders, you’ll love Stuff. —Colleen Oakley

What possesses someone to save every scrap of paper thats ever come into his home? What compulsions drive a woman like Irene, whose hoarding cost her her marriage? Or Ralph, whose imagined uses for castoff items like leaky old buckets almost lost him his house?

Randy Frost and Gail Steketee were the first to study hoarding when they began their work a decade ago; they expected to find a few sufferers but ended up treating hundreds of patients and fielding thousands of calls from the families of others. Now they explore the compulsion through a series of compelling case studies in the vein of Oliver Sacks.

With vivid portraits that show us the traits by which you can identify a hoarder - piles on sofas and beds that make the furniture useless, houses that can be navigated only by following small paths called goat trails, vast piles of paper that the hoarders churn but never discard, even collections of animals and garbage - Frost and Steketee illuminate the pull that possessions exert on all of us.

Whether we're savers, collectors, or compulsive cleaners, very few of us are in fact free of the impulses that drive hoarders to the extremes in which they live. For all of us with complicated relationships to our things, Stuff answers the question of what happens when our stuff starts to own us.

"This succinct, illuminating book will prove helpful to hoarders, their families, and mental health professionals who work with them." ( Publishers Weekly)