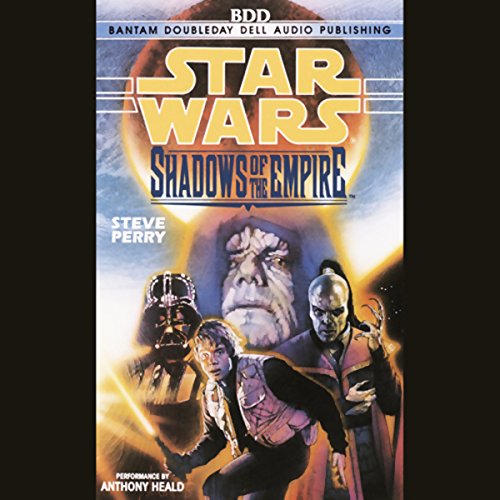 Star Wars: Shadows of the Empire

He is Xizor, Underlord of a galaxy-wide criminal organization, and he seeks to displace Darth Vader as the Emperor's right hand. To do so, he will hatch a brilliantly evil plan to discredit Vader in the Emperor's eyes. In the meantime, he will join the Dark Lord in an unholy alliance whose common target is Luke Skywalker.

Though he is cold and reptilian, Xizor has a certain predatory charisma that not even Leia can completely resist. Against the judgment of Chewbacca, who has promised the frozen Han to keep her from harm, Leia walks willingly into Xizor's lair in a dangerous play of passion and willpower to get the information she needs to defeat him.

"Anthony Heald is a superb performer for the various Star Wars audiobooks. He slides in and out of distinctive Star Wars characters with such smoothness that the characters are instantly recognizable, as if the original actors were working in ensemble." ( AudioFile)

Great audio book. Or should I say audio play?

Great performance from the narrator! I really liked his voices! All of them were great. And the sound effects were a nice feature.