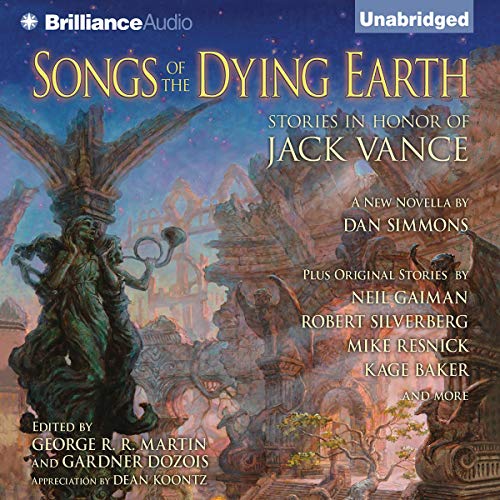 Songs of the Dying Earth

Jack Vance was a seminal figure in the development of modern fantasy - so much so that it's nearly impossible to imagine the genre as we know it today without him. In the course of his more than 50-year career, he has published dozens of major novels, as well as collections filled with marvelously crafted stories, winning the Hugo Award, the Nebula Award, the Edgar Award, the Grand Master Award from the Science Fiction Writers of America, and several World Fantasy Awards, including the prestigious Lifetime Achievement Award.

Vance's masterpiece, The Dying Earth, may be the most influential fantasy novel of the 20th century, surpassed only by J.R.R. Tolkien's Lord of the Rings trilogy. It has not only inspired several generations of fantasy writers, from Gene Wolfe and Michael Moorcock to Neil Gaiman and George R.R. Martin, but its influence has reached deep into the realms of graphic novels, comics, fantasy role-playing games such as Dungeons & Dragons, and even computer gaming.

The anthology Songs of the Dying Earth has assembled one of the most distinguished casts of authors ever - including Dan Simmons, Neil Gaiman, George R. R. Martin, Paula Volsky, Mike Resnick, Robert Silverberg, Lucius Shepard, Tad Williams, Tanith Lee, Liz Williams, Glen Cook, and eleven other famous writers - to write stories in honor of the genius of Jack Vance, stories using the bizarre and darkly beautiful far future setting of the Dying Earth, near the very end of Earth's lifespan, where mighty wizards duel with spells of dreadful potency under a waning and almost burnt-out red sun, and adventurers and cutpurses strive to hoodwink and out-trick each other in haunted forests full of demons and monsters strange almost beyond comprehension.