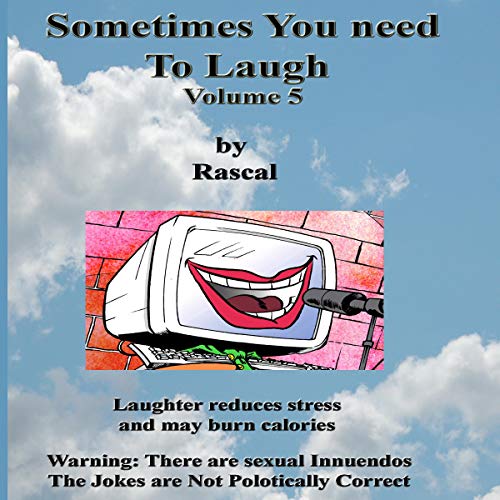 Sometimes You Need to Laugh, Volume 5

Fifth volume of adult jokes and stories. These jokes are often sexual in nature. They deal with sexual misunderstandings between men and women. It is broken down by categories from aliments to Viagra. Religious jokes, doctor and nurse jokes, couples jokes - all are enjoyable.

Example: "Shark in a Pool"

A multimillionaire threw a lavish party several times a year.

At the parties, he would usually offer some outrageous offer.

This year he offered to give half of his billion-dollar estate when he died, or one million dollars in cash, or the hand of his beautiful daughter in marriage to a courageous person who could swim the length of his Olympic swimming pool. The catch was there was an eight-foot Great White Shark in the pool.

He announce the offer from a podium in front of the diving board facing his guests. Suddenly behind him, there was a splash. He turned to see a man frantically swimming with the speed of Johnny Weissmuller when he played Tarzan.

The shark was swimming with its jaws snapping inches from his feet, but the man was moving too fast.

Upon reaching the far side of the swimming pool, the man grabbed a rail and yanked his body out of the water, as the shark’s mouth snapped on air less than an inch from his foot.

The rich man was good to his promise and asked him, “Do you want half of my estate when I die?”

“Then do you want the one million dollars in cash?

“Then you must want to marry my beautiful daughter.”

The man shook his head and said, “No.”

Puzzled, the rich man asked, “What do you want?”

“I want to know who the SOB was that pushed me into the pool!”