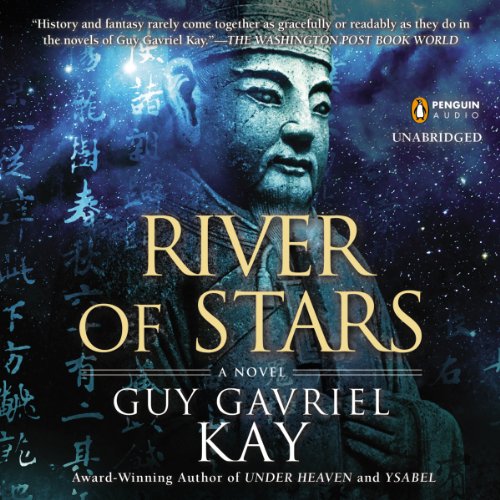 In his critically acclaimed novel Under Heaven, Guy Gavriel Kay told a vivid and powerful story inspired by China’s Tang Dynasty. Now, the international best-selling and multiple award-winning author revisits that invented setting four centuries later with an epic of prideful emperors, battling courtiers, bandits and soldiers, nomadic invasions, and a woman battling in her own way, to find a new place for women in the world - a world inspired this time by the glittering, decadent Song Dynasty.

Ren Daiyan was still just a boy when he took the lives of seven men while guarding an imperial magistrate of Kitai. That moment on a lonely road changed his life...in entirely unexpected ways, sending him into the forests of Kitai among the outlaws. From there he emerges years later - and his life changes again, dramatically, as he circles toward the court and emperor, while war approaches Kitai from the north.

Lin Shan is the daughter of a scholar, his beloved only child. Educated by him in ways young women never are, gifted as a songwriter and calligrapher, she finds herself living a life suspended between two worlds. Her intelligence captivates an emperor - and alienates women at the court. But when her father’s life is endangered by the savage politics of the day, Shan must act in ways no woman ever has.

In an empire divided by bitter factions circling an exquisitely cultured emperor who loves his gardens and his art far more than the burdens of governing, dramatic events on the northern steppe alter the balance of power in the world, leading to events no one could have foretold, under the river of stars.

"One of the greatest audiobook narrators ever, Vance brings his perfect timing and feather-touch sensitivity to Kay's epic story set in a invented empire based on Tang Dynasty China. Vance's many fans may be best situated to appreciate the subtle ways he modulates his voice for each book he reads. In this case, Kay invokes a world of stylized manners and deadly gambits, infused with an aesthetic founded on the most exquisite appreciation of the beauty and melancholy of the natural world. One of Vance's fortes is conveying understated irony, and it serves him very well here. He acquits himself especially well with Kay's landscape descriptions, so evocative you feel you’re breathing the autumn mist as it rises from the bamboo groves." (Laura Miller, Salon)

"From whatever angle you approach it, River of Stars is a major accomplishment, the work of a master novelist in full command of his subject. It deserves the largest possible audience” ( Washington Post)
"Kay has the uncanny ability to depict the grand sweep of historical events through the eyes of those living through them…What’s even more amazing is how through his careful rendering of character and environments we are drawn into this history… River of Stars is an exceptional piece of work." ( Seattle Post-Intelligencer)
“Vance's skill with long passages of description and explication is put to good use here. His tone is nostalgic and introspective…” ( AudioFile)