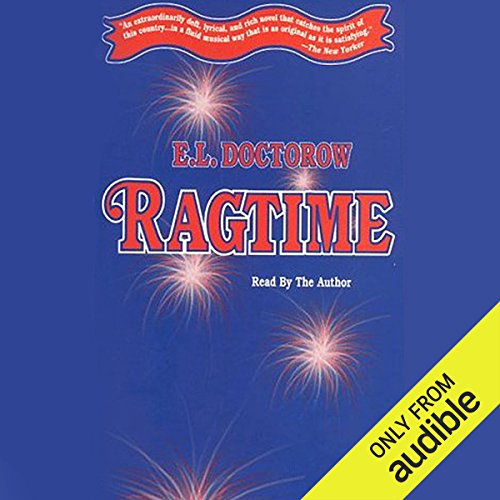 The story opens in 1906 in New Rochelle, New York, at the home of an affluent American family. One lazy Sunday afternoon, the famous escape artist Harry Houdini swerves his car into a telephone pole outside their house. Almost magically, the line between fantasy and historical fact, between real and imaginary characters, disappears. Henry Ford, Emma Goldman, J. P. Morgan, Evelyn Nesbit, Sigmund Freud, and Emiliano Zapata slip in and out of the tale, crossing paths with Doctorow's imagined family and other fictional characters, including an immigrant peddler and a ragtime musician from Harlem whose insistence on a point of justice drives him to revolutionary violence.

A rich tapestry, Ragtime captures the spirit of America in a unique historic context.

Time magazine included the novel in its Time 100 Best English-language Novels from 1923-2005.

"Doctorow does a fairly nice job reading his justly celebrated portrait of 1906 America. He has a sandy, pleasant, lightly accented voice and a fine sense of the dramatic." ( AudioFile)

A book like no other I have ever read. No wonder this titel is on some Top 100 lists of literature. It is an historical novel, buy in a class of it's own. I read it in one day.