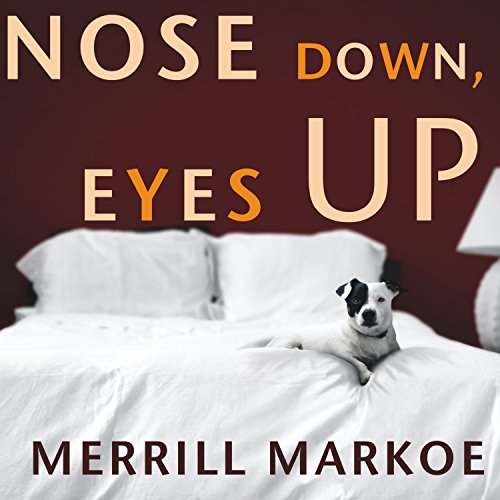 Nose Down, Eyes Up

This comic tale of a terminally adolescent 40-something and the dogs he communicates with is sure to charm any animal lover. After all, who hasn't wondered what their pets would say if given the chance? Performer David Drummond's pleasant voice and comedic timing are perfectly suited to the tale of handyman Gil and the chaos that ensues in his life when his dog Jimmy realizes the two are not really father and son. And that's not the half of it. There are scheming ex-wives, irritatingly New Age girlfriends, needy mothers, annoying brothers, and more. A light, amusing listen for those who sometimes think they prefer dogs to people.

At 47, Gil is the world's oldest 22-year-old man. He lives rent-free as a handyman in the L.A. summer house of a couple of rich retirees who only come out for vacations. Gruff, shrewdly observant, but perplexed and beleaguered by women since his nasty divorce, Gil has been dating Sara, an animal communicator, long enough to converse freely with all four of his dogs (especially Jimmy, the alpha).

When Jimmy learns Gil isn't his biological father, he demands to meet his birth mother, a dog owned by Gil's sexy ex-wife, Eden, now remarried to a much wealthier man. Then Gil's employers take their vacation, forcing him to relocate and setting in motion an odyssey that ultimately shines a light on the root of Gil's problems with women and adulthood by forcing him to move in with his mother.Filled with the sharp social and sexual insight - and an uncanny understanding of the thought processes of dogs - that have become Merrill Markoe's trademarks, Nose Down, Eyes Up is a howlingly funny story of love, sex, and the meaning of family.

"Markoe's hilarious dialogue should be a must-read for dog lovers." (Publishers Weekly)
"Markoe's satire is right-on, even if, as often happens in real life, the dogs are more interesting than their owners. " (Booklist)