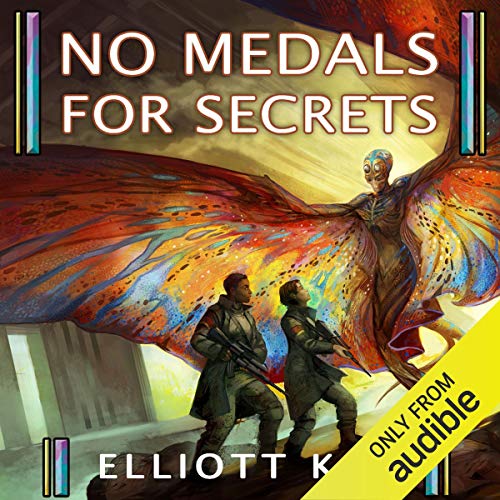 No Medals for Secrets

The Union of Humanity exists only because the aliens demanded it. After a hundred different treaties and countless broken promises, mankind's powerful neighbors forced humanity into a common defense and a single diplomatic voice. Yet within the Union's borders, the human race is as fractious as ever. When the star system of Archangel is invaded by the three greatest corporations in human space, the Union is powerless to intervene.

Corporal Alicia Wong thrives on the front lines. She doesn't like the war, but she likes the challenges and the clear-cut goals. She likes knowing who her friends and enemies are, too. Yet after uncovering evidence of alien contact in violation of Union laws, Alicia finds herself in a world of espionage and covert missions. Before it's all over, her choices may change the course of Archangel's war - and humanity's future.

Great adition to the poor mans war.
Love the speaker. Miss Irondale is on of the best out there.
Mister Kay knows how to give his characters personallity.