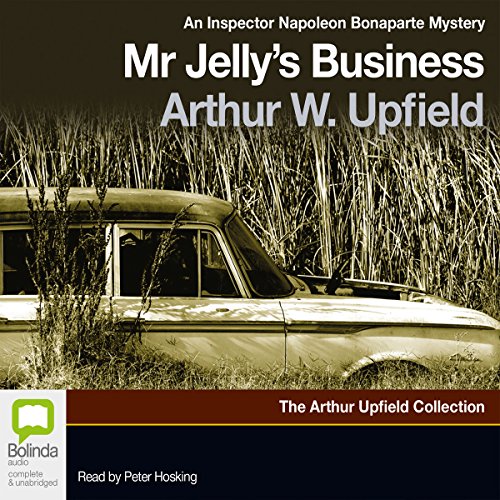 Mr. Jelly's Business is one of hte finest of Arthur Upfield's many distinguished stories about the career of Detective Inspector Napoleon ("Bony") Bonaparte. It takes Bony to the West Australian town of Burracoppin to investigate the disappearance of George Loftus, whose car was found wrecked near the longest fence in the world, the 1,500 mile Rabbit Fence. He meets Loftus's wife, who is anything but grief-stricken at her husband's disappearance; Loftus's hired man, singularly reticent about his own past history; and many of Burracoppin's numerous gossips. Later he encounters the mysterious Mr. Jelly, whose business causes his charming duaghters great anxiety.

The double question of Loftus's disappearance and Mr. Jelly's business taxes Bony's well-known powers of observation and deduction to the utmost, until the two problems are simultaneously solved.

As anyone who knows Arthur Upfield's other work would expect, Mr. Jelly's Business is more than a story of crime and detection: It also offers an admirable picture of life in West Australia's wheat country.