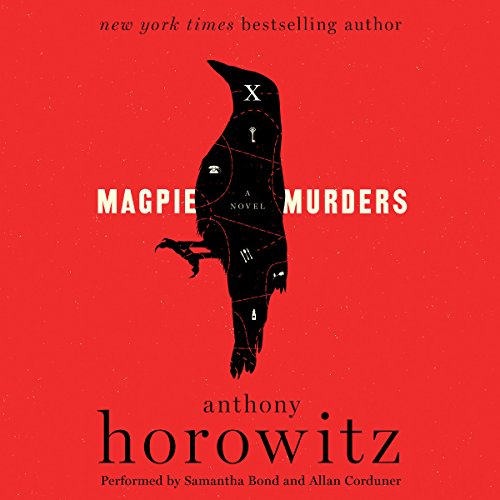 When editor Susan Ryeland is given the manuscript of Alan Conway's latest novel, she has no reason to think it will be much different from any of his others. After working with the best-selling crime writer for years, she's intimately familiar with his detective, Atticus Pünd, who solves mysteries disturbing sleepy English villages. An homage to queens of classic British crime such as Agatha Christie and Dorothy Sayers, Alan's traditional formula has proved hugely successful. So successful that Susan must continue to put up with his troubling behavior if she wants to keep her job.

Conway's latest tale has Atticus Pünd investigating a murder at Pye Hall, a local manor house. Yes, there are dead bodies and a host of intriguing suspects, but the more Susan reads, the more she's convinced that there is another story hidden in the manuscript: one of real-life jealousy, greed, ruthless ambition, and murder.

Masterful, clever, and relentlessly suspenseful, Magpie Murders is a deviously dark take on vintage English crime fiction in which the listener becomes the detective.

"Listen straight through - or savor slowly? That will be your struggle because Horowitz's delicious mystery-within-a-mystery is, as they say, 'fiendishly clever' and terrifically narrated." ( AudioFile)

Lots of surprises and twists

I liked the complexity of the narration (a story within a story) - it was a refreshing change to other crime novels and added to the suspense, seeing as there are two plot ends to look forward to. However, the characters didn't always feel completely consistent to me. For instance, the editor criticized the sister's reasoning why she thought Alan had been murdered, but she uses similar arguments to explain her own doubts (the appointments in his diary). All in all I enjoyed the book though!

Everything is perfect about the Magpie Murders. Highly recommended - a truly impressive performance by both the author and the narrators!.Love it to bits.