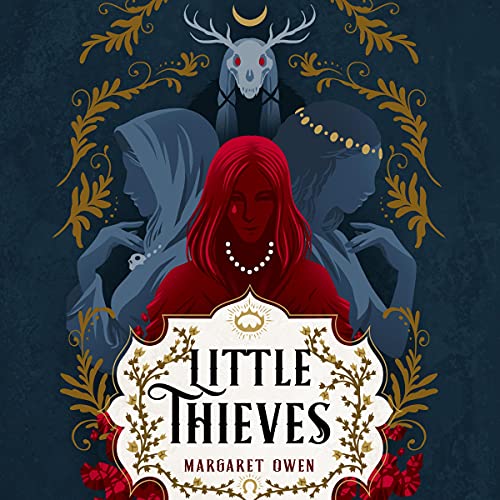 A scrappy maid must outsmart both palace nobles and Low Gods in a new YA fantasy by Margaret Owen, author of the Merciful Crow series.

The little thief steals gold, but the great one steals kingdoms;

And only one goes to the gallows...

Vanja Schmidt knows no gift is freely given, not even a mother’s love. Abandoned to Death and Fortune as a child, she has scraped by as a lowly maidservant with her quick wits and the ability to see her godmothers’ hands at work in the world. But when they demand her lifelong servitude in exchange, Vanja decides that gifts not given freely...can always be stolen.

When an opportunity rises to steal a string of enchanted pearls, Vanja seizes it, transforming herself into Gisele, the princess she’s served for years. As the glamorous princess, Vanja leads a double life, charming the nobility while ransacking their coffers as a jewel thief. Then, one heist away from funding an escape from her god-mothers, Vanja crosses the wrong god, and is cursed to turn into jewels herself. The only way to save herself is to make up for what she’s taken - starting with her first victim, Princess Gisele.

A wicked retelling of “The Goose Girl", Little Thieves is a delightfully witty YA fantasy about the fickle hands of fate, and changing the cards we’re dealt.