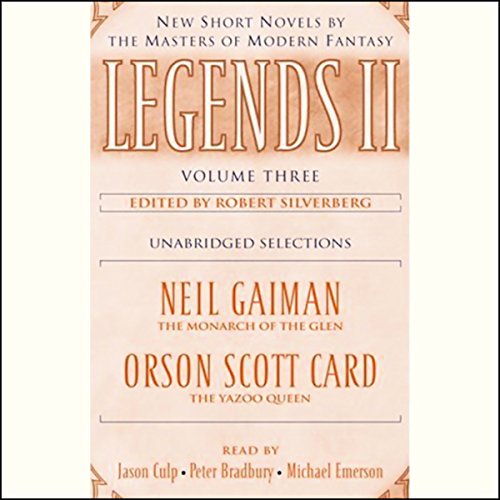 Fantasy fans, rejoice! Years after writer and editor Robert Silverberg made publishing history with Legends, the acclaimed anthology of original short novels by some of the greatest writers in fantasy fiction, the third volume is here.

Each of the best-selling writers represented in these selections from Legends II returns to the fantasy universe he made famous throughout the world. Whether set before or after events already recounted elsewhere, whether featuring beloved characters or compelling new creations, these masterful short novels are all mesmerizing stand-alones, perfect introductions to the work of their authors, and indispensable additions to the epics on which they are based.

Robert Silverberg spins an enthralling tale of Majipoor's early history, and remote future, as seen through the eyes of a dilettantish poet who discovers an unexpected destiny in "The Book of Changes".

Neil Gaiman gives us a glimpse into what befalls the man called Shado after the events of his Hugo Award-winning novel American Gods in "The Monarch of the Glen".

Orson Scott Card tells a tale of Alvin Maker and the mighty Mississippi, featuring a couple of ne'er-do-wells named Jim Bowie and Abe Lincoln, in "The Yazoo Queen".