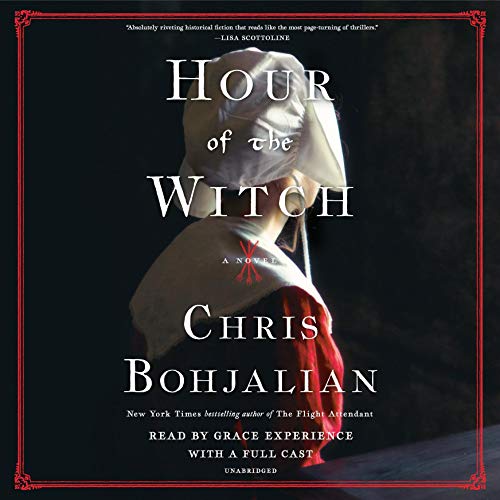 Hour of the Witch

“Absolutely riveting historical fiction that reads like the most page-turning of thrillers.” (Lisa Scottoline, bestselling author of Eternal)

A young Puritan woman - faithful, resourceful, but afraid of the demons that dog her soul - plots her escape from a violent marriage in this riveting and propulsive novel of historical suspense from the number one New York Times best-selling author of The Flight Attendant.

Boston, 1662. Mary Deerfield is 24 years old. Her skin is porcelain, her eyes delft blue, and in England she might have had many suitors. But here in the New World, amid this community of saints, Mary is the second wife of Thomas Deerfield, a man as cruel as he is powerful. When Thomas, prone to drunken rage, drives a three-tined fork into the back of Mary's hand, she resolves that she must divorce him to save her life.

But in a world where every neighbor is watching for signs of the devil, a woman like Mary - a woman who harbors secret desires and finds it difficult to tolerate the brazen hypocrisy of so many men in the colony - soon becomes herself the object of suspicion and rumor. When tainted objects are discovered buried in Mary's garden, when a boy she has treated with herbs and simples dies, and when their servant girl runs screaming in fright from her home, Mary must fight to not only escape her marriage, but also the gallows.

A twisting, tightly plotted novel of historical suspense from one of our greatest storytellers, Hour of the Witch is a timely and terrifying story of socially sanctioned brutality and the original American witch hunt.

A Lit Hub Most Anticipated Book of 2021

A CrimeReads Most Anticipated Book of 2021

"Throughout Bohjalian’s prolific career, he has rewarded readers with indelibly drawn female protagonists, and the formidable yet vulnerable Mary Deerfield is a worthy addition to the canon. Conjuring up specters of #MeToo recriminations and social media shaming, there are 21st-century parallels to Bohjalian’s atmospheric Puritan milieu, and his trademark extensive research pays off in this authentic portrait of courage in the face of society’s worst impulses. Bohjalian is a perennial favorite, and this Salem Witch Hunt drama has a special magnetism.” (Booklist, starred review)

"In 1660s Boston, blue-eyed, porcelain-delicate Mary Deerfield is determined to escape her marriage after her husband, the cruel and controlling Thomas Deerfield, shoves a fork through her hand in a drunken rage. Yet unfortunate incidents - a screaming maid, a boy’s death after Mary treats him with herbs - leaves her longing not just for freedom but for her life; she could be condemned to the gallows as a witch. Another surprise read from the fabulously protean, New York Times best-selling Bohjalian.... Illustrates how rough justice can get when religion and institutional sexism are in the mix." (Library Journal)

"A twisty thriller set in 17th-century Boston.... With its exploration of themes including domestic abuse, toxic masculinity, and mass hysteria, the novel feels like anything but a period piece." (Publishers Weekly)