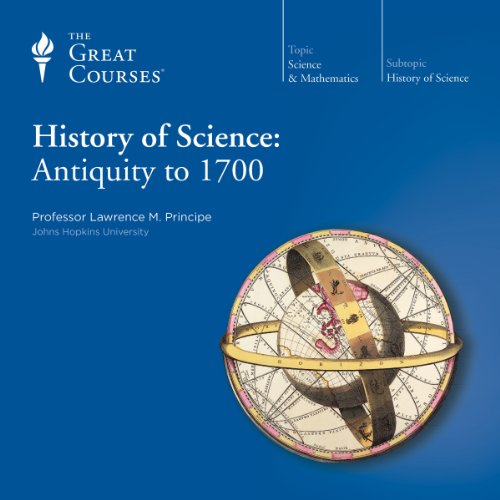 History of Science: Antiquity to 1700

For well over 2,000 years, much of our fundamental "desire to know" has focused on science. Our commitment to science and technology has been so profound that these stand as probably the most powerful influences on human culture. To truly understand our Western heritage, our contemporary society, and ourselves as individuals, we need to know what science is and how it developed.

In this 36-lecture series, one of science's most acclaimed teachers takes you through science's complex evolution of thought and discovery, often originating from ideas that by today's technological perspective might be considered ridiculous or humorous, although many are still relevant today. You'll consider science's often fascinating history, from ancient times to the Scientific Revolution, in terms of several penetrating questions, including two of special importance: Who pursued science, and why? What happened, and why?

In the hands of Professor Principe, the history of science becomes far more than just a litany of dates, significant individuals, and breakthrough discoveries. In examining the evolution of science, he restores the vitally important context that has been lost from the discussion, showing how science is characterized by ideas that link eras widely separated in time. A primary theme is the relationship between science and religion. Today, we tend to see the two as separate and even antagonistic. Theology, in fact, is a principal motivator for scientific inquiry. And in the Middle Ages, Christianity and Islam were of paramount importance in preserving and furthering scientific knowledge.

This is a highly informative course and as captivating as a crime novel. Prof. Principe works hard to show the motivations and worldviews of the actors in this drama adding a lot of spice to his narration. On YouTube you find some public lectures by him (e. g. https://www.youtube.com/watch?v=XFVARio4pAk) giving you a good impression of his style.