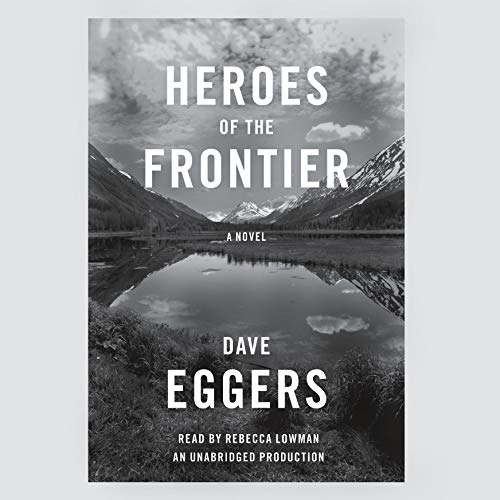 Heroes of the Frontier

A captivating, often hilarious novel of family, loss, wilderness, and the curse of a violent America, Dave Eggers' Heroes of the Frontier is a powerful examination of our contemporary life and a rousing story of adventure.

Josie and her children's father have split up, she's been sued by a former patient and lost her dental practice, and she's grieving the death of a young man senselessly killed. When her ex asks to take the children to meet his new fiancée's family, Josie makes a run for it, figuring Alaska is about as far as she can get without a passport. Josie and her kids, Paul and Ana, rent a rattling old RV named the Chateau, and at first their trip feels like a vacation: They see bears and bison, they eat hot dogs cooked on a bonfire, and they spend nights parked along icy cold rivers in dark forests. But as they drive, pushed north by the ubiquitous wildfires, Josie is chased by enemies both real and imagined, past mistakes pursuing her tiny family, even to the very edge of civilization.

A tremendous new novel from the best-selling author of The Circle, Heroes of the Frontier is the darkly comic story of a mother and her two young children on a journey through an Alaskan wilderness plagued by wildfires and a uniquely American madness.

"Adept at literary reinvention, Eggers steers his ongoing social critique in an especially liberating new direction in this comedic outlaw odyssey.... Over the course of Josie's hilarious and scathing inner monologue about the depravity of our species, Eggers offers glimpses into her molten sorrows, including the death of her favorite patient in Afghanistan and a decimating malpractice lawsuit. As this trio of surprisingly resilient fugitives careens haphazardly from peril to refuge and back again, Eggers, writing with exuberant imagination, incandescent precision, and breathless propulsion, casts divining light on human folly and generosity and the glories and terror of nature. This uproarious quest, this breathless journey from lost to found, this delirious American road-trip saga, is fueled by uncanny insight, revolutionary humor, and profound pleasure in the absurd and the sublime." (Donna Seaman, Booklist)
"The frontier in Eggers's appealing and affecting new novel is Alaska, but also, arguably, the adventures of its heroine, Josie. The core of the novel is relatable to anyone who has thought about starting over in an unknown place...[Eggers's] writing is fresh and full of empathy, his observations on modern society apt and insightful." ( Publishers Weekly)
"Josie, a dentist, is numbed by a shot of existential Novocain when she heads to Alaska with her two children at the start of Dave Eggers's latest novel. The heroine is running from a past that includes a breakup, a lawsuit that ends her dental practice, the haunting death of a young man...and a fog of overall detachment.... Along roads dotted by warning signs for wild animals, Josie takes her kids north in an RV, dodging police, wildfires and other hazards." ( The Wall Street Journal)