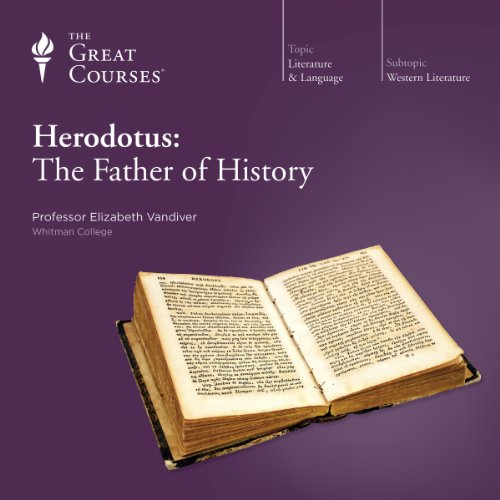 Herodotus: The Father of History

Witness the "works and wonders" of the ancient world through the eyes of its first great historian in this sparkling series of 24 lectures from a much-honored teacher and classical scholar.

Herodotus (c. 484-420 B.C.E.) was a Greek who was born in what is now the modern Turkish resort town of Bodrum and who died, so tradition says, in the south of Italy. In between, his tirelessly inquiring mind took him from one corner of the known world to another. And he reported on or visited all of its continents (Europe, Asia, and Africa) to write about the vast array of subjects that captured his interest. These included the "great works" of the ancient land of Egypt; the remarkable kings who built the vast Persian Empire; and the strange customs and unlikely origins of the Scythians, a warlike, mounted people who lived beyond the Danube and whose repulse of Darius and the Persians in 513 B.C.E. made them the first Europeans to throw back an eastern invasion.

The book that emerged from these "inquiries" - The Histories - is Herodotus's only known work, yet it still made Herodotus one of the rare, landmark figures in the story of thought. In these lectures, Professor Vandiver introduces you to Herodotus and The Histories, tracing the influences he assimilated and the new methods he used in crafting this monumental work. You learn how that work looked at the past in new and fresh ways, seeing it not as a distant recess shrouded in legend and rumor, but as something that lies close at hand; as something that immediately affects the here and now, and as a subject whose great personalities and patterns of events can be studied in order to make the reasons behind them as clear as possible.