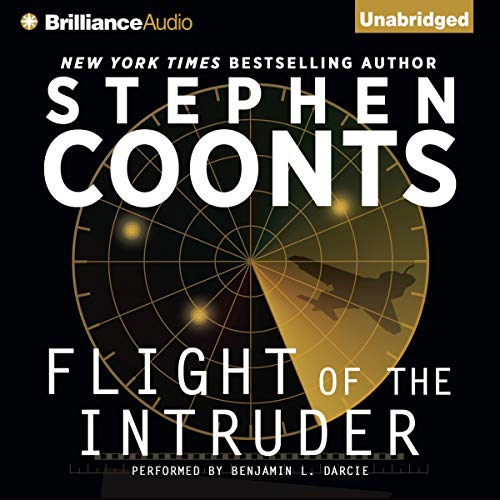 Flight of the Intruder

Hailed as the finest combat aviation novel to emerge from the Vietnam War, Flight of the Intruder spent 28 weeks on the New York Times hardcover best-seller list and became one of the top-20 best-selling first novels of all time. An instant classic, the book was translated into more than 20 languages and made into a major motion picture. Its hero, Jake Grafton, became a household name and the star of many more Coonts’ best-sellers. Without question, the strength of the book lies in its flying scenes when Jake Grafton straps himself into the cockpit of his A-6 Intruder. Jake’s love of flying is contagious whether you are hearing the book for the first time or listening to it for the third. No one better captures the world of Navy carrier pilots than Stephen Coonts. An Intruder pilot who flew combat missions off the deck of the USS Enterprise in the Vietnam War, Coonts lived the life he writes about, and he puts readers inside the hearts and minds of the pilots to reveal a world unknown to those outside the naval aviators’ fraternity. Few will forget the book’s final gut-wrenching scene when Jake’s once-innocent love of flying gives way to guilt and frustration and the need to give meaning to the deaths of his comrades.