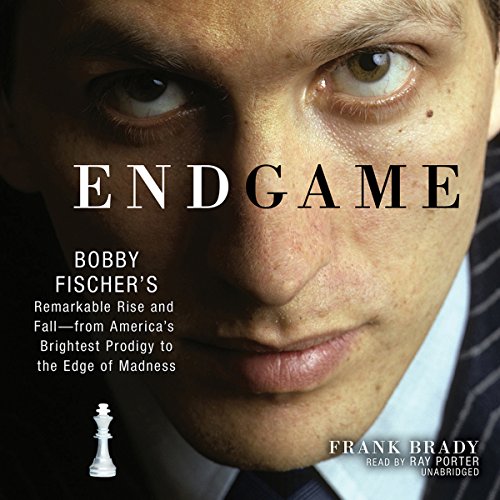 From Frank Brady, who wrote one of the best-selling books on Bobby Fischer of all time and who was himself a friend of Fischer’s, comes an impressively researched biography that for the first time completely captures the remarkable arc of Bobby Fischer’s life. When Bobby Fischer passed away in January 2008, he left behind a confounding legacy. Everyone knew the basics of his life—he began as a brilliant youngster, then became the pride of American chess, then took a sharp turn, struggling with paranoia and mental illness. But nobody truly understood him.

What motivated Fischer from such a young age, and what was the source of his remarkable intellect? How could a man so ambivalent about money and fame be so driven to succeed? What drew this man of Jewish descent to fulminate against Jews, and how was it that a mind so famously disciplined could unravel so completely? From Fischer’s meteoric rise, to an utterly dominant prime unequaled by any American chess player, to his eventual descent into madness, the book draws upon hundreds of newly discovered documents and recordings and numerous firsthand interviews conducted with those who knew Fischer best. It paints, for the very first time, a complete picture of one of America’s most enigmatic icons. This is the definitive account of a fascinating man and an extraordinary life, one that at last reconciles Fischer’s deeply contradictory legacy and answers the question, who was Bobby Fischer?

“The Mozart of the chessboard is inseparable from the monster of paranoid egotism in this fascinating biography. Brady, founding publisher of Chess Life magazine and a friend of Fischer, gives a richly detailed account of the impoverished Brooklyn wunderkind’s sensational opening…Brady gives us a vivid, tragic narrative of a life that became a chess game.” ( Publishers Weekly)
“I learned something new on nearly every page of this wonderful book. Frank Brady is the perfect biographer for Bobby Fischer, and Endgame tells the full and fair story of Fischer’s astonishing rise and heartbreaking fall." (Christopher Chabris, author of The Invisible Gorilla )
“Fischer is America’s greatest antihero. This fascinating biography is filled with hope, Cold War intrigue, the fulfillment of genius, and an explosive fall from grace that is both deeply moving and, ultimately, profoundly sad.” (Jeremy Silman, author of The Amateur’s Mind)