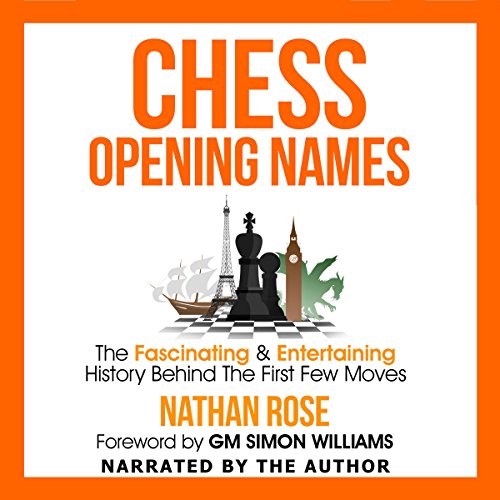 The people, places, and stories behind the chess openings and their names: When we play chess, the first few moves define the game. You probably know the names already: the Sicilian Defense, the Ruy Lopez, the French Defense, the Caro-Kann, the Benoni, the London System, the Scandinavian Defense and so on. But most chess players don't know WHY the openings are called what they are.

In this entertaining audiobook, best-selling author Nathan Rose lays out the origins of over 50 standard chess openings and their names. The tales are often deeply connected to the lives of the leading chess grandmasters, the historical events taking place at the time, and the critical chess world championship contests. All these stories are collected together in this, the first audiobook dedicated to uncovering them.

The names of the chess openings tell the history of chess: You will meet larger-than-life characters such as Bobby Fischer, Aron Nimzowitsch, Alexander Alekhine, Frank Marshall, Siegbert Tarrasch, Wilhelm Steinitz, and Paul Morphy. Some of these men won their fame in the chess world championship, while some gained wider renown for reasons other than their ability to play chess. You will be agog at Paul Morphy's stunning conquest of Europe and subsequent disappearance, the outrageous antics of Aron Nimzowitsch upon losing a game, and the eccentric names Alexander Alekhine gave his cats.

You will also travel through the places and events that defined chess in the early years. As David Shenk showed in The Immortal Game, the history of chess has often mirrored the history of society. There's the 1972 world chess championship that pitted the Soviet Union's Boris Spassky against America's irascible Bobby Fischer in the Match of the Century; the 1939 chess olympiad in Argentina which coincided with the outbreak of World War II; and the unveiling of the "Mechanical Turk" chess-playing contraption in 18th-century Vienna.

Impress your friends with superior opening knowledge - without the tedious study!

Knowing the history of chess will prove your cleverness even more effectively than winning over the board. Once you have listened to this audiobook, you can speak of your temptation to play the Sicilian Defense, but instead play Alekhine's Defense. Then, you can explain the origins of the names to your opponent. Even if you lose the game, your opponent will still be impressed!

Enjoy this capitvating romp through the names of the first few moves. This audiobook is brisk, enjoyable addition to any chess player's library. Prepare to be surprised, amazed, amused and informed.