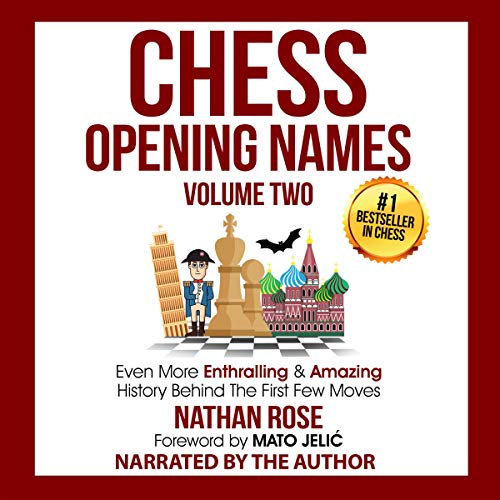 Even more of the people, places, and stories behind the chess openings and their names

When we play chess, the first few moves define the game. You may know the names already: the Italian Game, the Cambridge Springs Defense, the Smith-Morra Gambit, the Max Lange Attack, the Colle System, the Blackmar-Diemer Gambit, the Paulsen Variation, the Damiano Defense, and so on. But most chess players don't know why the openings are called what they are.

In this entertaining book, best-selling author Nathan Rose lays out the origins of over 50 chess openings and their names. This second volume of Chess Opening Names dives deeper into the history of the lesser-known openings, because the stories behind the lesser-known chess opening names are every bit as interesting as the better known ones. The names of the chess openings tell the history of chess. You will meet seminal chess figures such as Anatoly Karpov, Judit Polgár, Tigran Petrosian, Emanuel Lasker, Saviely Tartakower, José Raúl Capablanca, Mikhail Botvinnik, and Viktor Korchnoi. Some of them won their fame in the world chess championship, while some gained renown for reasons other than their ability to play chess.Over 50 standard chess openings and variations. Impress your friends with superior opening knowledge - without the tedious study!

Knowing the history of chess will prove your cleverness even more effectively than winning over the board. Once you have listened to this book, you can speak of your temptation to play the Tal Variation, but instead play the Keres Attack. Then, you can explain the origins of the names to your opponent. Even if you lose the game, your opponent will still be impressed!