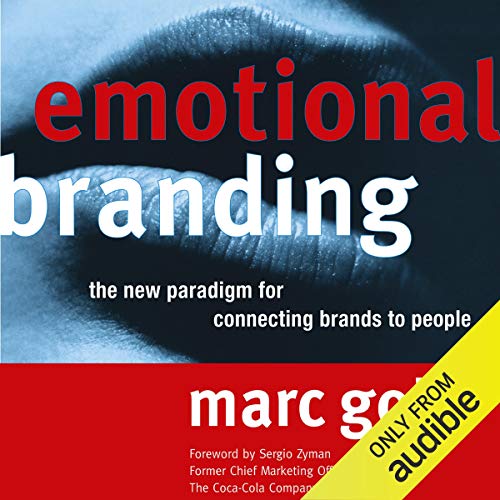 Emotional Branding is the best-selling revolutionary business audiobook that has created a movement in branding circles by shifting the focus from products to people. The “10 Commandments of Emotional Branding” have become a new benchmark for marketing and creative professionals, and emotional branding has become a coined term by many top industry experts to express the new dynamic that exists now between brands and people. The emergence of social media, consumer empowerment, and interaction were all clearly predicted in this audiobook 10 years ago around the new concept of a consumer democracy.

In this updated edition, Marc Gob covers how social media helped elect Barack Obama to the White House, how the idea behind Twitter is transforming our civilization, and why new generations are re-inventing business, commerce, and management as we know it by leveraging the power of the web. In studying the role of women as "shoppers in chief" and defining the need to look at the marketplace by recognizing differences in origins, cultures, and choices, Emotional Branding foresaw the breakup of mass media to more targeted and culturally sensitive modes of communications. As the first marketing book ever to study the role of the LGBTQ community as powerful influencers for many brands, Emotional Branding opened the door to a renewed sensitivity toward traditional research that privilege individuality and the power of the margins to be at the center of any marketing strategy.

A whole segment in the audiobook looks at the role of the senses in branding and design. The opportunity that exists in understanding how we feel about a brand determines how much we want to buy. By exploring the five senses, Emotional Branding shows how some brands have built up their businesses by engaging in a sensory interaction with their consumers. Emotional Branding explores how effective consumer interaction needs to be about senses and feelings, emotions and sentiments.

Critics hailed Emotional Branding as a breakthrough and a fresh approach to building brands. Design in this audiobook is considered a new media, the web a place where people will share information and communicate, architecture a part of the brand-building process, and people as the most powerful element of any branding strategy. Most importantly, it emphasizes the need to transcend the traditional language of marketing - from one based on statistics and data to a visually compelling new form of communication that fosters creativity and innovation.