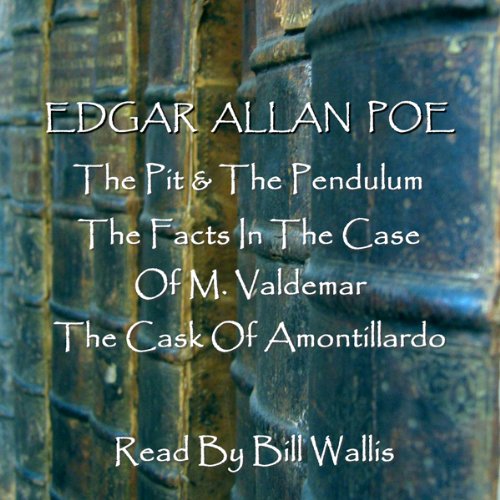 Edgar Allan Poe, Volume 1: 'The Pit and the Pendulum', 'The Facts in the Case of M. Valdemar', and 'The Cask of Amontillardo'

Edgar Allan Poe, considered the greatest of all writers of macabre stories, was born in Boston, Massachesetts, in 1809. His father, an Irish-American actor, died the following year, and his mother, an English actress, the year after, in Richmond, Virginia. John Allan, a wealthy Richmond merchant, adopted him. When he was 7, the Allans moved to England, sending him to school at Stoke Newington; at age 12, they moved back to Richmond. He wanted to become a writer, but John Allan wanted him to become a lawyer. He failed to finish courses at the University of Virginia and at West Point Military Academy, and John Allan disowned him.

Struggling to live by his writing, Poe became an ill-paid magazine writer, and at 26 married Virginia, the daughter of his aunt, Mrs Clemm, aged 14. They were happy together, and while married, he wrote much of his best work. But Virginia contracted tuberculosis, and worry over her illness and their poverty led him to drink heavily. After six years of marriage, she died. Suffering a complete breakdown, he was nursed back to health by Mrs Clemm. Returning to Richmond, he made a determined attempt to give up drinking. In 1849 he got engaged to a Richmond woman he had loved in his youth. Travelling north to collect Mrs Clemm to the wedding, he stopped off in Baltimore, Ohio. Found there lying drunk on a pavement, he was taken to hospital, but died a few hours later.

Poe's poems and short stories have influenced scores of writers. He invented the modern detective story, and his tales of terror are as chilling and powerful today as they have ever been. The stories in this volume are "The Pit and the Pendulum", "The Facts in the Case of M. Valdemar", and "The Cask of Amontillardo".

Das sagen andere Hörer zu Edgar Allan Poe, Volume 1: 'The Pit and the Pendulum', 'The Facts in the Case of M. Valdemar', and 'The Cask of Amontillardo'