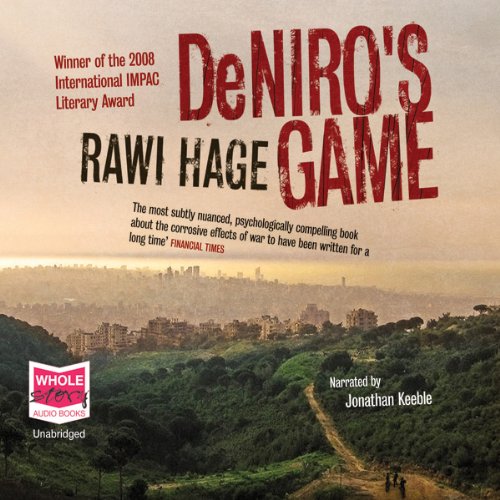 Bassam and George are childhood best friends who have grown up on the Christian side of war-torn Beirut.

Now on the verge of adulthood, they must choose their futures: to remain in the exhausted, corrupt city of their birth, or to go into exile abroad, cut off from the only existence they have known.

Bassam chooses one path - obsessed with leaving Beirut, he embarks on a series of petty crimes to fund his escape to the West.

Meanwhile, George amasses power in the underworld of the city, embracing a life of military service, organised crime, killing, and drugs.

Their two paths inevitably collide, with explosive consequences. De Niro's Game is a devastating, timely portrait of two young men and an entire city formed and deformed by war.

"Both terse and lyrical, Hage's narrative is a wonder, alternately referencing modern American action heroes and ancient Arabic imagery. The blend of the two is as startling as it is beautiful." (Booklist)
"Hage's energetic prose matches the brutality depicted in the novel without overstating the narrative's tragic arc - an impressive first outing for Hage." (Publishers Weekly)