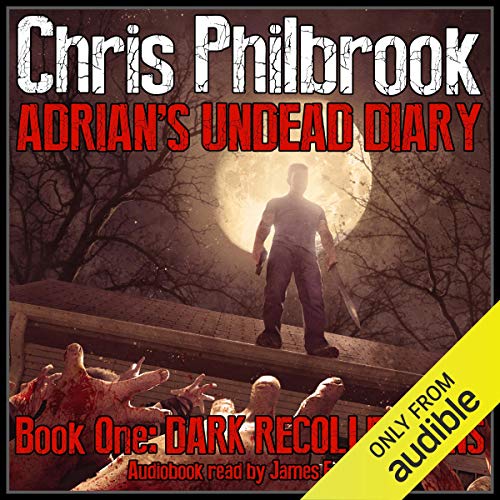 For the first time, the Internet phenomenon is now in print! Beheading a zombie isn't easy in a world where you're more afraid of the living than the dead. Adrian Ring's simple life is thrown into chaos when the world is ripped apart by a plague of undead and legions of desperate survivors. Retreating to Auburn Lake Preparatory Academy, Adrian attempts to rescue friends and family on the way while dancing around his impending insanity over who and what he left behind, and evading maniac survivors. He saves his cat Otis, but shoots his mom. Pretty successful, all things considered.

Dark Recollections is the first part of Adrian's own story of how he survived after "That Day". Told through his eyes as he talks to his laptop, affectionately named 'Mr. Journal", and through short stories that entwine with his tales that bring forth dark visions of a world being eaten alive by an unimaginable evil. Adrian's Undead Diary is an eight-part epic about a solitary, guilt-stricken man who didn't think he deserved to live, but realized very soon that he survived and suffered for a reason. Dark Recollections is the first book in the AUD series. It covers Adrian's journal entries from September 21st 2010, to December 1st, 2010. Intermingled with his personal diary entries, book one also contains the short stories "Phil's Story", "McGreevy's Report", and "Soccer Mom".