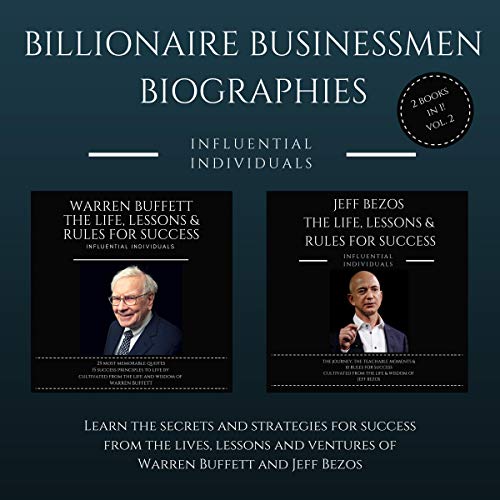 Learn the secrets and strategies for success from the lives, lessons, and ventures of Warren Buffett and Jeff Bezos.

If you’re looking for what lies behind the extraordinary success of some of the world’s richest businessmen, then listen to these two stories of two billionaire business moguls. This audio-collection reveals the lives, lessons, and rules for success that have influenced Warren Buffett and Jeff Bezos, two billionaire businessmen who single-handedly disrupted and transformed the way we think of business. What makes their stories even more inspiring is that both created their wealth and success from their own initiatives at a young age and their journeys are ones littered in incredible stories of success, failure, and lessons learned. Perhaps your dream is to make your millions through clever investments as Warren Buffett did. Or maybe you’d like to become the CEO of your own company and follow in the footsteps of the world’s richest man, Jeff Bezos. Or it could be that the success of these billionaires simply inspires you to keep working harder, whether in life or in your career. To become a billionaire from scratch is no easy feat. It can seem an impossible dream that’s exclusive only to the lucky few. However, this audiobook shows it is possible with the right know-how and that becoming a billionaire is less about luck and more about making the right decisions and working hard. The ‘Billionaire Businessmen Biographies’ is two books in one: ‘Warren Buffett, The Life, Lessons and Rules for Success’ and ‘Jeff Bezos, The Life, Lessons and Rules for Success’. Drawing from the secrets from these world-class businessmen, it reflects on their lives, lessons, and ventures to identify their key success strategies so you can apply them too. In this audiobook, you will discover:

If you want to learn more about the strategies these two businessmen adopted to get among the world’s richest and most powerful people, then buy this audiobook now!