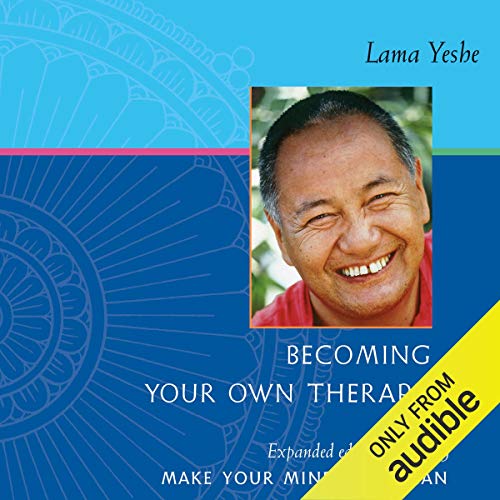 Becoming Your Own Therapist and Make Your Mind an Ocean

This audiobook contains both of the very popular Lama Yeshe booklets, Becoming Your Own Therapist and Make Your Mind an Ocean. These lectures explore the general topics of Buddhism and the mind and are followed by question-and-answer sessions that include a fascinating historic exchange between Lama and a group of psychiatrists illuminating the differences between Western and Buddhist concepts of mental health.

Becoming Your Own Therapist: These three public talks given by Lama Yeshe present the general topic of Buddhism and each is followed by a lively exchange between Lama and the audience. Lama always enjoyed the give and take of these exchanges and pretty much anything went! While these talks were labeled lectures, Lama actually wanted each of us to use them as mirrors for our minds, to look beyond the words and find ourselves and in this way become our own psychologists.

Make Your Mind an Ocean: The talks given by Lama in this section explore the functions of the mind. Two were lunchtime lectures at Melbourne and Latrobe Universities and one was an evening lecture given to the general public. Perhaps of greatest interest is the lecture entitled "A Buddhist Approach to Mental Illness” in which Lama met with a group of psychiatrists at Prince Henry's Hospital who were delighted to listen and question Lama and thereby reveal the differences between Western and Buddhist concepts of mental health.

The Lama Yeshe Wisdom Archive (LYWA) is the collected works of Lama Thubten Yeshe and Kyabje Lama Thubten Zopa Rinpoche. The Archive was founded in 1996 by Lama Zopa Rinpoche, the Archive’s spiritual director, to spread the Dharma for the happiness and benefit of all beings in as many ways as possible. Visit us online at www.LamaYeshe.com.

well narrated. story is good for...

Story is more aimed towards those new to Buddhism teachings. It was well narrated and easy to follow.