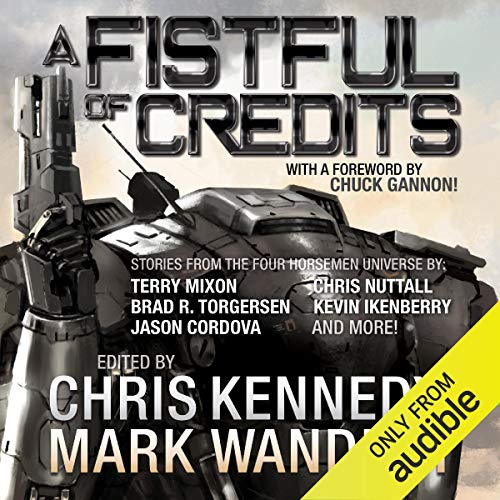 A Fistful of Credits: Stories from the Four Horsemen Universe

It's the 22nd Century. The galaxy has opened up to humanity as a hyperactive beehive of stargates and new technologies, and we suddenly find ourselves in a vast playground of different races, environments, and cultures. There's just one catch: we are pretty much at the bottom of the food chain.

Enter the Four Horsemen universe, where only a willingness to fight and die for money separates Humans from the majority of the other races. Enter a galaxy not only of mercenaries, but also of Peacemakers, bounty hunters, and even a strung out junkie in the way of a hired assassin.

Edited by best-selling authors and universe creators Mark Wandrey and Chris Kennedy, A Fistful of Credits includes all-new stories in the Four Horsemen universe by a variety of best-selling authors - and some you may not have heard of...yet. The 14 authors take on various aspects of the universe, giving you additional insight into a galaxy that isn't at war...but definitely isn't at peace. There's only one thing for sure - anything's possible for a fistful of credits!