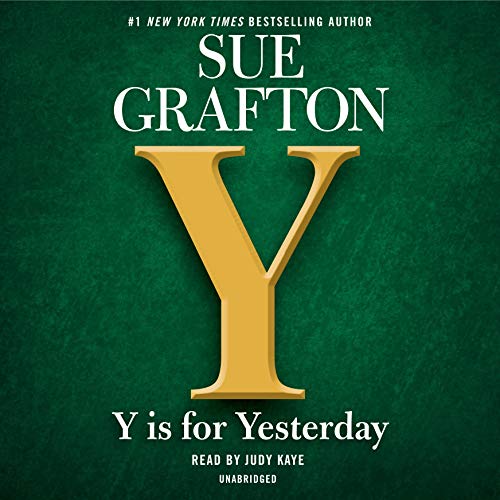 Y is for Yesterday

In 1979, four teenage boys from an elite private school sexually assault a 14-year-old classmate - and film the attack. Not long after, the tape goes missing and the suspected thief, a fellow classmate, is murdered. In the investigation that follows, one boy turns state’s evidence and two of his peers are convicted. But the ringleader escapes without a trace.

Now, it’s 1989 and one of the perpetrators, Fritz McCabe, has been released from prison. Moody, unrepentant, and angry, he is a virtual prisoner of his ever-watchful parents - until a copy of the missing tape arrives with a ransom demand. That’s when the McCabes call Kinsey Millhone for help. As she is drawn into their family drama, she keeps a watchful eye on Fritz. But he’s not the only one being haunted by the past. A vicious sociopath with a grudge against Millhone may be leaving traces of himself for her to find....

“I’m going to miss Kinsey Millhone. Ever since the first of Sue Grafton’s Alphabet mysteries, A Is For Alibi, came out in 1982, Kinsey has been a good friend and the very model of an independent woman, a gutsy Californian P.I. rocking a traditional man’s job...it’s Kinsey herself who keeps this series so warm and welcoming. She’s smart, she’s resourceful, and she’s tough enough to be sensitive on the right occasions.” (New York Times Book Review)

"The consistent quality and skillful innovations in this alphabet series justify all the praise these books have received over the past 35 years.” (Wall Street Journal)

“This will leave readers both relishing another masterful entry and ruing the near-end of this series. Prime Grafton.” (Booklist, starred review)