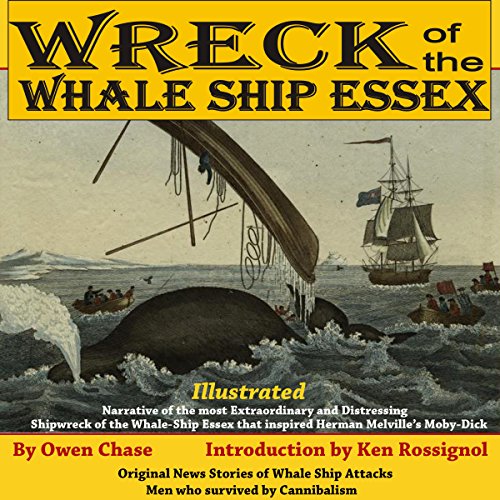 Wreck of the Whale Ship Essex

In one of the most spellbinding accounts of men who go down to the sea in ships, the modern listener is given a seat in the whale boat of Owen Chase as he and his fellow crew and their captain make way in three boats after the wreckage of the Whaleship Essex.

The account of how the Essex was wrecked inspired the infamous book Moby Dick and countless movies, including In the Heart of the Sea.

The perils of sea, storms, nefarious intent of evil men, and fate combined to bring an end to a long whaling voyage - typically hard and grueling enough without suffering an attack by a furious and vengeful sperm whale.

The story, told in a first-person narrative by Owen Chase, the first mate of the Essex, was first published in 1821 and served to inspire Herman Melville to write his fictional book of the attack by the whale.

The perseverance and determination of the crew, mate, and captain to use each and every tool and morsel available to them in salvaging the wrecked Essex to outfit their flimsy whaleboats for a voyage of more than 2,500 miles back to the South American coast is remarkable in many ways.

Every ounce of energy and civility rapidly evaporated after two months at sea. The story not told by Melville may be the best part, though the attack by the whale is still impressive if one imagines being on the small ship as the leviathan repeatedly bashes in the hull.

In addition to the stirring account by Owen Chase are parts of the account by cabin boy Thomas Nickerson.

Nickerson returned to the seas on whaleships following the Essex shipwreck, one of just a few known to have been sunk by a whale. After he retired to running a boardinghouse in Nantucket, Nickerson finally wrote his account of the Essex and the plight of the crew. Nickerson put pen to paper only when challenged by a visiting author.