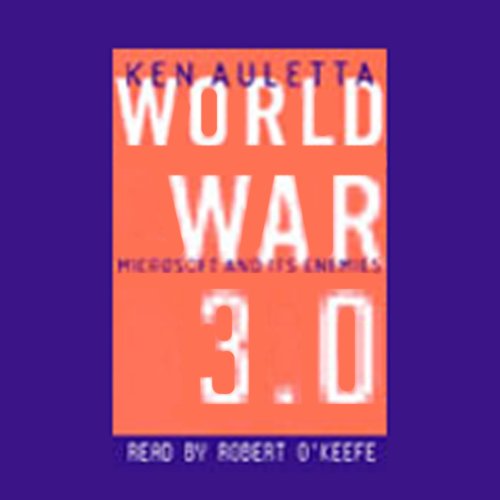 The Internet Revolution, like all great industrial changes, has made the world's elephantine media companies tremble that their competitors will get to new terrain first and seize its commanding heights. In a climate in which fear and insecurity are considered healthy emotions, corporate violence becomes commonplace.

No one has been more powerful or felt more fear or reacted more violently than Bill Gates and Microsoft. Afraid that any number of competitors might outflank it - whether Netscape or Sony or AOL Time Warner or Sun or AT&T or Linux-based companies that champion the open-source movement or some college student hacking in his dorm room - Microsoft has waged holy war on all foes, leveraging its imposing strengths.

In World War 3.0, Ken Auletta chronicles this fierce conflict from the vantage of its most important theater of operations: the devastating second front opened up against Bill Gates' empire by the United States government. With his superb gifts and extraordinary access to all the principal parties, Ken Auletta crafts this landmark confrontation into a tight character- and incident-filled courtroom drama featuring the best legal minds of our time. And with the wisdom gleaned from covering the converging media, software, and communications industries for The New Yorker for the better part of a decade, Auletta uses this pivotal battle to shape a magisterial reckoning with the larger war and the agendas, personalities, and prospects of its many combatants.

A highly compelling account of the extraordinary trial that challenged the invincibility of the world's most powerful corporation. Auletta reveals the personalities behind the headlines and brings into sharp focus the very human qualities that have made Microsoft so powerful - and so vulnerable. - Kim Polese, chairman and chief strategy officer, Marimba, Inc.