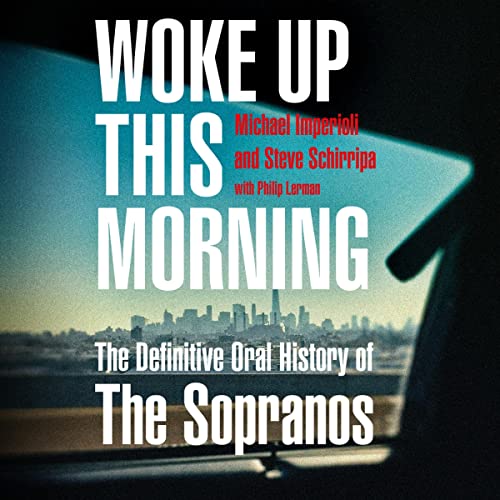 Woke Up This Morning

Who made the phone call that got HBO to launch the show? What’s the significance of all those eggs? And what the hell ever happened to the Russian? In Woke Up This Morning, Michael Imperioli and Steve Schirripa have all the answers - and they’re revealing where all the bodies are buried.

Inspired by the incredibly successful Talking Sopranos podcast, The Sopranos stars Michael Imperioli (Christopher Moltisanti) and Steve Schirripa (Bobby Baccalieri) finally reveal all the Soprano family secrets in a surprising, funny and honest new book. Woke Up This Morning is the definitive behind-the-scenes history of the groundbreaking HBO series that became a worldwide cultural phenomenon, ushered in a new Golden Age of Television and to this day continues to be one of the most binged shows of all time.

Michael and Steve tell all the incredible stories that The Sopranos fans have been waiting to hear for more than 20 years. The book covers the entire history of The Sopranos series from the original concept pitch and casting to the infamous cut to black - and answer many of the thousands of fan questions sent to the podcast, as well as dispel some widely propagated myths and reveal things no one outside the show would even know to ask.

"Ever wished you could hang out with the cast and crew of The Sopranos and just listen to them trade stories? There are plenty of tantalising bits of trivia - Tony was Tommy Soprano in the pilot script; producers wanted Lorraine Bracco to play Tony’s wife, but she said she would only consider playing Melfi, the psychiatrist - but this isn’t just a trivia collection. Mostly it’s about friends and colleagues getting together to pay tribute to one another and to a series that rewrote many of the rules of television. Love and respect for the show’s star, the late James Gandolfini, permeates the book, as does admiration for the show’s creator, David Chase, who started with a vague idea about a crook and his mother and built it into something that’s almost Shakespearean in its thematic scope. For Sopranos fans this one is an absolute must-read." (Booklist)

"Essential for fans, with a revelation on every page.... Devotees will revel in the stroll into series minutiae." (Kirkus)