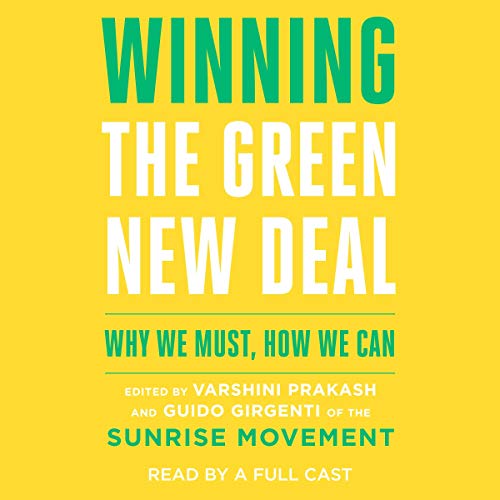 An urgent and definitive collection of essays from leaders and experts championing the Green New Deal - and a detailed playbook for how we can win it - including contributions by leading activists and progressive writers like Varshini Prakash, Rhiana Gunn-Wright, Bill McKibben, Rev William Barber II, and more.

In October 2018, scientists warned that we have less than 12 years left to transform our economy away from fossil fuels or face catastrophic climate change. At that moment, there was no plan in the US to decarbonize our economy that fast. Less than two years later, every major Democratic presidential candidate has embraced the vision of the Green New Deal - a rapid, vast transformation of our economy to avert climate catastrophe while securing economic and racial justice for all.

What happened? A new generation of leaders confronted the political establishment in Washington, DC, with a simple message: The climate crisis is here, and the Green New Deal is our last, best hope for a livable future. Now comes the hard part: turning that vision into the law of the land.

In Winning a Green New Deal, leading youth activists, journalists, and policymakers explain why we need a transformative agenda to avert climate catastrophe and how our movement can organize to win. Featuring essays by Varshini Prakash, cofounder of Sunrise Movement; Rhiana Gunn-Wright, Green New Deal policy architect; Joseph Stiglitz, Nobel Prize-winning economist; Bill McKibben, internationally renowned environmentalist; Mary Kay Henry, the president of the Service Employees International Union, and others, we’ll learn why the climate crisis cannot be solved unless we also confront inequality and racism, how movements can redefine what’s politically possible and overcome the opposition of fossil fuel billionaires, and how a Green New Deal will build a just and thriving economy for all of us.

For anyone looking to understand the movement for a Green New Deal and join the fight for a livable future, there is no resource as clear and practical as Winning the Green New Deal.

“The Adults in The Room,” “People Power and Political Power,” “Organize, Vote, Strike” ©2020 Varshini Prakash “The Crisis Here and Now” ©2020 David Wallace-Wells “Paradise - may it be all its name implies” ©2020 Mikala Butson “We Didn’t Start the Fire” ©2020 Kate Aronoff  “Money smelled like mountains of oyster shells rotting in the sun” ©2020 Genai Lewis “We Shine Bright: Organizing by Hope and Song” ©2020 Sara Blazevic, Aru Shiney-Ajay, Dyanna Jaye, Victoria Fernandez “You know the future you deserve” ©2020 Aracely Jimenez-Hudis “Market Fundamentalism at The Wrong Time” ©2020 Naomi Klein “Averting Climate Collapse Requires Confronting Racism” ©2020 Ian Haney-Lopéz “The Next Era of American Politics” ©2020 Varshini Prakash, Guido Girgenti, and Waleed Shahid “A Third Reconstruction for Our Common Home” ©2020 Rev. William Barber II “From Protest to Primaries: The Movement in the Democratic Party” ©2020 Alexandra Rojas and Waleed Shahid “When you’re our age, you know it’s there” ©2020 Jeremy Ornstein “Lessons from Labor and the Old New Deal” ©2020 Robert Master “How We Got to The Green New Deal” ©2020 Bill McKibben “Lessons from Environmental Justice” ©2020 Kerene Tayloe “Policies and Principles of a Green New Deal” ©2020 Rhiana Gunn-Wright “A place of grit and perseverance” ©2020 Lily Gardner “An Economic Case for the Green New Deal” ©2020 Joseph Stiglitz “Honoring What Came Before” ©2020 Julian Noisecat “A Green New Deal for the Gulf South” ©2020 Colette Pichon Battle “A Worker’s Green New Deal” ©2020 Mary Kay Henry