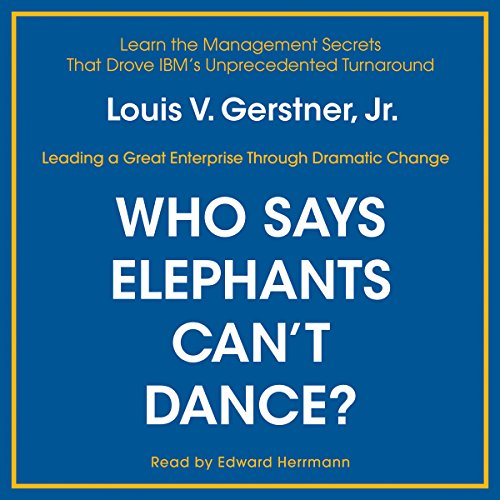 In 1990, IBM had its most profitable year ever. By 1993, the company was on a watch list for extinction, victimized by its own lumbering size, an insular corporate culture, and the PC era IBM had itself helped invent.

Enter Lou Gerstner. The presumption was that Gerstner had joined IBM to preside over its continued dissolution into a confederation of autonomous business units, effectively eliminating the corporation that had invented many of the industry's most important technologies. Instead, Gerstner took hold of the company, making the bold decision to keep it together, defiantly announcing, "The last thing IBM needs right now is a vision."

Told in Lou Gerstner's own words, this is a story of an extraordinary turnaround, a case study in managing a crisis, and a thoughtful reflection on the computer industry and the principles of leadership. Summing up his historic business achievement, Gerstner recounts high-level meetings, explains the no-turning-back decisions that had to be made, and offers his hard-won conclusions about the essence of what makes a great company run.

"A well-rendered self-portrait of a CEO who made spectacular change on the strength of personal leadership." ( Publishers Weekly)
"Edward Herrmann's pacing and understated connection with the material in this memoir makes the audio seem compact and relaxed. The writing is also outstanding, lacking excessive pride or self-congratulation....An essential volume for anyone interested in technology, large organizations, or IBM's miraculous rebirth under Gerstner's leadership." ( AudioFile)

Lou Gerstner is one of the best leaders of our time. What he accomplished at IBM is unique in so many ways an definitely worth listening to.