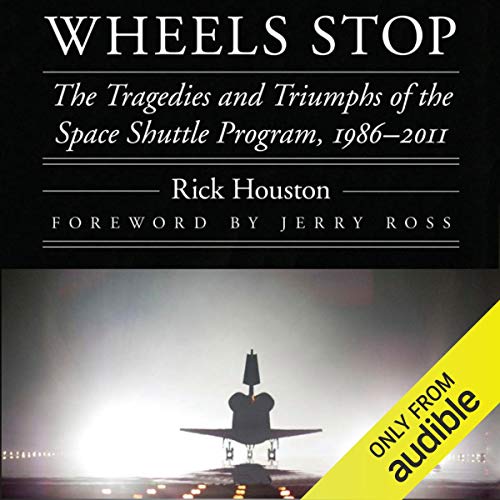 Wheels Stop: The Tragedies and Triumphs of the Space Shuttle Program, 1986-2011

Humanity's first reusable spacecraft and the most complex machine ever built, NASA's space shuttle debuted with great promise and as a dependable source of wonder and national pride. But with the Challenger catastrophe in 1986, the whole space shuttle program came into question, as did NASA itself, so long an institution that was seemingly above reproach.

Wheels Stop tells the stirring story of how, after the Challenger disaster, the space shuttle not only recovered but went on to perform its greatest missions. From the Return to Flight mission of STS-26 in 1988 to the last shuttle mission ever on STS-135 in 2011, Wheels Stop takes listeners behind the scenes as the shuttle's crews begin to mend Cold War tensions with the former Soviet Union, conduct vital research, deploy satellites, repair the Hubble Space Telescope, and assist in constructing the International Space Station. It also tells the heart-wrenching story of the Columbia tragedy and the loss of the magnificent STS-107 crew.

As complex as the shuttle was, the people it carried into orbit were often more so - and this is their story, too. Close encounters with astronauts, flight controllers, and shuttle workers capture the human side of the space shuttle's amazing journey - and invite listeners along for the ride.

"With the Space Shuttle program now at an end, documenting the amazing thirty-year career of these iconic orbiters holds an untold amount of historical importance. Spaceflight isn't easy, people pay in blood and sweat to make it happen. Rick Houston lends a voice to some of the key people involved in what is not only an American treasure but a global superstar." (Chris Bergin, NASASpaceflight.com)
"Enthusiastic portrayal of the heroic age of American space travel." ( Publishers Weekly)