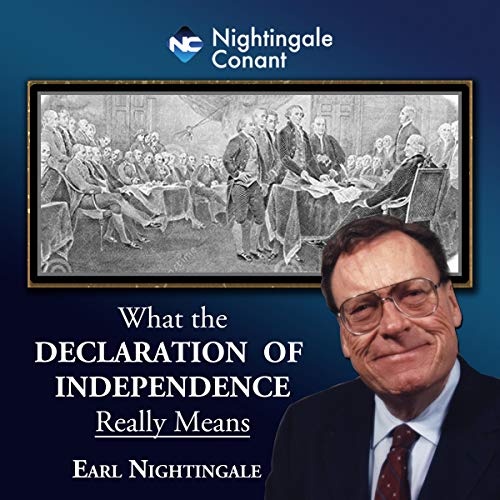 What the Declaration of Independence Really Means

Earl Nightingale presents this re-enactment of what the Declaration of Independence really means and the price men were willing to pay to establish freedom for us all. Informative, inspirational, and especially appropriate for the Fourth of July!

As a Depression-era child, Earl Nightingale was hungry for knowledge. From the time he was a young boy, he would frequent the Long Beach Public Library in California, searching for the answer to the question, "How can a person, starting from scratch, who has no particular advantage in the world, reach the goals that he feels are important to him, and by so doing, make a major contribution to others?" His desire to find an answer, coupled with his natural curiosity about the world and its workings spurred him to become one of the world's foremost experts on success and what makes people successful.

Earl Nightingale's early career began when, as a member of the Marine Corps, he volunteered to work at a local radio station as an announcer. The Marines also gave him a chance to travel, although he only got as far as Hawaii when the Japanese attacked Pearl Harbor in 1941. Earl managed to be one of the few survivors aboard the battleship Arizona. After five more years in the service, Earl and his wife moved first to Phoenix then Chicago to build what was to be a very fruitful career in network radio. As the host of his own daily commentary program on WGN, Earl Nightingale arranged a deal that also gave him a commission on his own advertising sales. By 1957, he was so successful, he decided to retire at the age of 35.

In the meantime, Earl had bought his own insurance company and had spent many hours motivating its sales force to greater accomplishments. When he decided to go on vacation for an extended period of time, his sales manager begged him to put his inspirational words on record. The result later became the recording entitled The Strangest Secret, the first spoken word message to win a Gold Record by selling over a million copies. In The Strangest Secret, Earl had found an answer to the question that had inspired him as a youth and, in turn, found a way to leave a lasting legacy for others

About this time, Earl met a successful businessman by the name of Lloyd Conant and together they began an "electronic publishing" company which eventually grew to become a multi-million-dollar giant in the self-improvement field. They also developed a syndicated, five-minute daily radio program, Our Changing World, which became the longest-running, most widely syndicated show in radio.