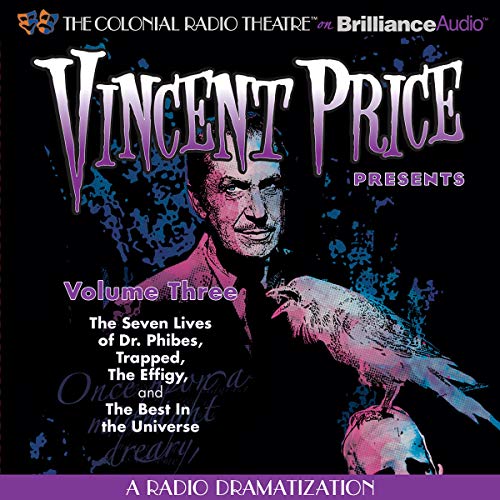 The stories dramatized on this collection include:

"The Seven Lives of Dr. Phibes" - Dramatized by M.J. Elliott. Based on the story by Mel Smith, Clark Castillo, Paul H. Birch. As the new world prepares to ring out the old millennium, Inspector Trout arrives in New York City to be greeted by a series of macabre murders and the knowledge that his arch-nemesis, Dr. Anton Phibes, is behind them!

"Trapped" - Dramatized by Deniz Cordell, from a story by Nick Lyons. After being rescued from a flood by a man named Brandon, a married couple soon learn the hard way that their savior is in fact not what he seems.

"The Effigy" - Dramatized by M.J. Elliott. Based on the story by Paul J. Salamoff. A journey past a forbidding cornfield becomes a nightmare for 9-year-old Bobby Hollister when the local bullies force him to retrieve the mask from the nightmarish scarecrow that watches over the crop. Things aren't always what they seem in this new tale of terror because stuffing and straw are not the only thing sheathed beneath the scarecrow's mask!

"The Best in the Universe" - Dramatized by Jack J. Ward, from a story by Paul J. Salamoff. Assignments on frontier planets always irritated intergalactic mob hitman Randall Stiles and his partner Jake Mackey and this mission would soon prove why. What starts out as a seemingly routine pick-up turns quite deadly in this sci-fi tale that takes the listener on an unexpected ride to the outer edge of the known Universe.