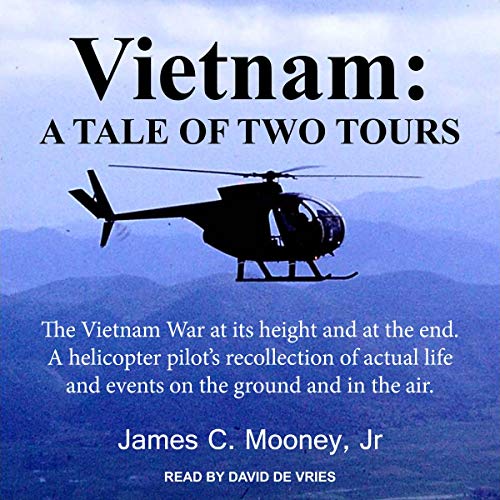 Vietnam: A Tale of Two Tours

This is a US Army helicopter pilot's candid, firsthand account of his Vietnam experience in the air and on the ground at the height of US troop strength and then again when he returned for a second tour of duty at the very end of the war. It is a nonpolitical description of what life was really like for him and others who served in Vietnam. There is no embellishment or any secondhand stories from anyone else about their experiences in Vietnam.

The author describes a first tour in the Central Highlands supporting an Infantry Division as a pilot in an Assault Helicopter Company flying the UH-1H (Huey) and later during his first tour as an OH-6A Light Observation Helicopter (LOH) pilot assigned to an Infantry Brigade. The book includes a description of combat assaults; the Cambodian Invasion; ground and air tactics; people he met and worked with; helicopter operations; rescues; combat in the air and on the ground; leadership; unit life and living at four different locations; everyday camp life and conditions; as well as many vignettes as to things both good and bad he witnessed during his first tour. The author continues his book with a history of his second tour around Saigon while assigned to an Air Cavalry Troop and how much the war and other things had changed from his first tour. Events recounted include the Air Cavalry Troop mission and life at Bien Hoa, the cease fire and post-cease fire support missions, moving to Saigon and experiences living there, meeting his former enemy, the prisoner-of-war exchange, being shot down after the cease fire began, and being on the final flight out of combat troops that closed out the war for America. He closes with his overall reflections on his wartime service.

This is a must-have for those who want to know what it was really like to have been there without the hype, politics, or hidden agenda that usually is part of any Vietnam War story.