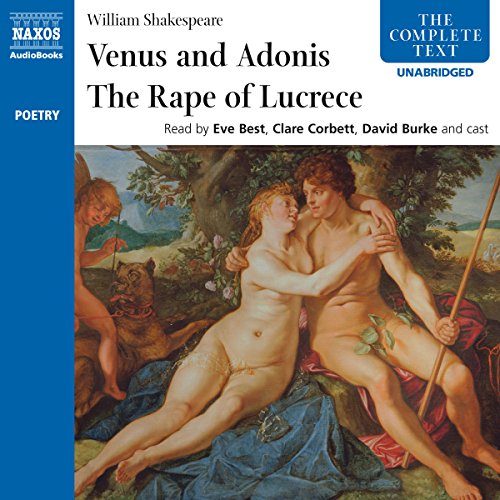 'Venus and Adonis' and 'The Rape of Lucrece'

Featuring acclaimed cast-members with transatlantic credentials, these two narrative poems demonstrate Shakespeare’s mastery of the tragic and comedic. Venus and Adonis follows the goddess of love as she attempts to seduce Adonis, more interested in hunting than Venus’ advances. Featuring racy double-entendres, the poem is famous for its sexually suggestive witticisms. The Rape of Lucrece follows the sexual mistreatment of Lucrece - wife of a retainer to the Roman emperor - at the hands of Sextus Tarquinius, the emperor’s son. These poems portray two very different heroines, one forceful and confident, the other a victim of tragic violence. Actress Clare Corbett (MI-5, Doctor Who) shines as the nymphish Venus, while Eve Best (The Kings Speech, Nurse Jackie) is honest and uncompromising as the ill-fated Lucrece.

These two great poems date from Shakespeare’s early years and are full of passion and invention. In Venus and Adonis, the goddess of love pleads with the beautiful boy to submit to her advances and become her love - but he only wants to hunt boar. In the more serious Rape of Lucrece, Shakespeare draws on the Roman tale of the Emperor Tarquin’s desire for Lucrece and its tragic consequencies. These poems give prominent parts to the two heroines, and Clare Corbett and Eve Best shine.