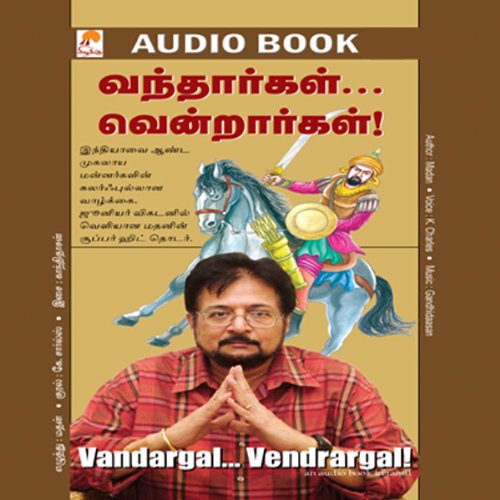 An audiobook in Tamil.

History! What could be more boring than memorizing dates and years? How many attempts did Mohammed Ghazni make on India before he finally succeeded in conquering it? Who was the last Moghul? Who built the Jama Masjid?

Rote learning is now history. And history can be fun. Madan's Vandargal Vendrargal is an enjoyable listen as much as it is packed with facts of history. Examples of Madan's refreshingly different approach to writing history are: No kinder hearted king ever lived than Humayun. He would surely have entered the Guinness Book of World Records for compassion had there been one in his time!

Babur's eighth wife was a gun! It was love at first sight, and the emperor kept it lovingly by his side. "How could the man who built this mausoleum have been born on earth? Do you need proof that the blueprint for it came from the heavens?" from notes left by Shahjahan on the Tajmahal.

Akbar invited hundreds of sadhus on Sivaratri night and fasted in ritual penance along with them, to make Hindus happy. "Rulers cannot rest or take vacations. Their only duty is to labor constantly for the welfare of their subjects," so said Aurangzeb, whom many historians have labeled a despot.

Who would not enjoy reading history so written? Itâ¿¿s never too late, even if you missed out during your schooldays. You can make up by lapping up Madan's sugarcoated Moghul history.

Listen to this audiobook. It will bring back to life the great Moghuls we read about in our schoolbooks.

the actual history has been rewritten by fake writers . they support islam and muslim rulers with fake stories.