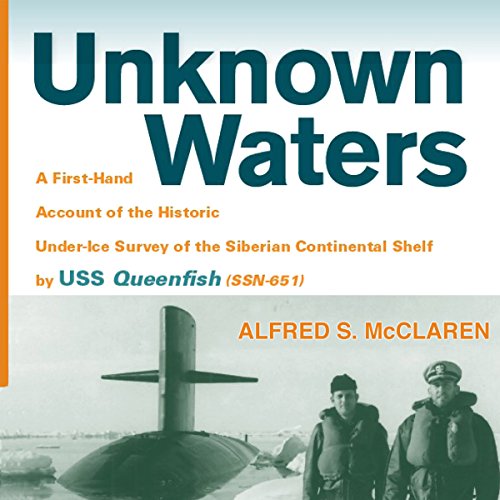 This audiobook tells the story of the brave officers and men of the nuclear attack submarine USS Queenfish (SSN-651), who made the first survey of an extremely important and remote region of the Arctic Ocean. The unpredictability of deep-draft sea ice, shallow water, and possible Soviet discovery all played a dramatic part in this fascinating 1970 voyage.

Covering 3,100 miles over a period of some 20 days at a laborious average speed of 6.5 knots or less, the attack submarine carefully threaded its way through innumerable underwater canyons of ice and over irregular seafloors, at one point becoming entrapped in an "ice garage". Only cool thinking and skillful maneuvering of the nearly 5,000-ton vessel enabled a successful exit.

The most hazardous phase of the journey began 240 nautical miles south of the North Pole with a detailed hydrographic survey of an almost totally uncharted Siberian shelf, from the northwestern corner of the heavily glaciated Severnaya Zemlya Archipelago to the Bering Strait via the shallow, thickly ice-covered Laptev, East Siberian, and Chukchi seas.

The skipper of the Queenfish had been trained and selected by Admiral Hyman Rickover and, inspired by this polar experience, McLaren became one of the world's foremost Arctic scientists, studying first at Cambridge University and then obtaining his doctorate in physical geography of the Polar Regions from the University of Colorado at Boulder.

" Unknown Waters is a splendid adventure. Captain McLaren's spellbinding account of his unparalleled voyage into the unknown beneath the ice off Siberia constitutes a treasure house of knowledge never before conceived of a dark and forbidding part of the globe. Audacious as well as entertaining!" (Clive Cussler)"Captain McLaren, a highly decorated submarine officer and one of the world’s foremost Arctic scientists, has written a riveting account of the first hydrographic survey of the Soviet Union’s Siberian coastline by a nuclear submarine." (VADM. John H. Nicholson, USN (Ret.), commanding officer, USS Sargo)