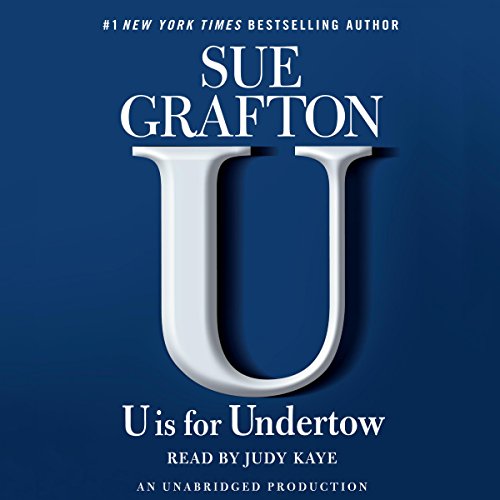 U Is for Undertow

Calling T is for Trespass "taut, terrifying, transfixing and terrific", USA Today went on to ask, "What does it take to write 20 novels about the same character and manage to create a fresh, genre-bending novel every time?"

It's a question worth pondering. Through 20 excursions into the dark side of the human soul, Sue Grafton has never written the same book twice. And so it is with this, her 21st. Once again, she breaks genre formulas, giving us a twisting, complex, surprise-filled, and totally satisfying thriller.

It's April 1988, a month before Kinsey Millhone's 38th birthday, and she's alone in her office doing paperwork when a young man arrives unannounced. He has a preppy air about him and looks as if he'd be carded if he tried to buy booze, but Michael Sutton is 27, an unemployed college dropout. Twenty-one years earlier, a four-year-old girl disappeared. A recent reference to her kidnapping has triggered a flood of memories. Sutton now believes he stumbled on her lonely burial when he was six years old. He wants Kinsey's help in locating the child's remains and finding the men who killed her. It's a long shot, but he's willing to pay cash up front, and Kinsey agrees to give him one day.

As her investigation unfolds, she discovers Michael Sutton has an uneasy relationship with the truth. In essence, he's the boy who cried wolf. Is his current story true, or simply one more in a long line of fabrications?

Grafton moves the narrative between the 80s and the 60s, changing points of view, building multiple subplots, and creating memorable characters. Gradually, we see how they all connect. But at the beating center of the novel is Kinsey Millhone, sharp-tongued, observant, a loner - "a heroine", said The New York Times Book Review, "with foibles you can laugh at and faults you can forgive."

"As this master of suspense continues to demonstrate in superb mystery after mystery, there are more ugly twists in the human heart than there are letters in the alphabet." ( Entertainment Weekly)
"It's as if Grafton purposely begins with a standard situation-and then gleefully sets about breaking every cardinal rule of the mystery novel." ( Los Angeles Times Book Review)

Das sagen andere Hörer zu U Is for Undertow