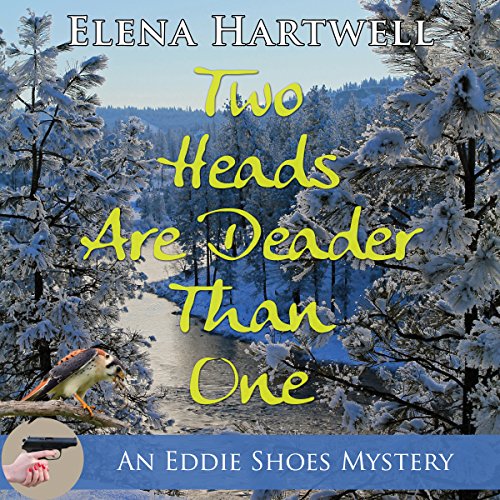 Two Heads Are Deader Than One

Private investigator Eddie Shoes is enjoying a rare period of calm. She's less lonely now that Chava, her card-counting mom from Vegas, is sharing her home. She also has a new companion, Franklin, a giant dog of curious ancestry.

Hoping for a lucrative new case, Eddie instead finds herself taking on a less promising client: her best friend from her childhood in Spokane. Dakota has turned up in Bellingham in jail, where she is being held on a weapons charge. Eddie reluctantly agrees not only to lend her friend money for bail but also to investigate who is stalking her. Soon after Dakota is freed, she disappears again, leaving Eddie to answer to the local cops, including her ex-boyfriend Chance Parker. Has Dakota been kidnapped? If not, why did she jump bail? What are Eddie's business cards doing on the bodies of two murder victims? The key to these mysteries lies in Dakota and Eddie's shared history, which ended when Eddie left home after high school. As a person of interest in both murder cases, Eddie is forced to go in search of the truth, digging into the past and facing her own demons.

"Narrator Moira Driscoll conveys cynicism and curiosity as the voice of Eddie Shoes, a private investigator who finds herself the prime suspect in her own case. Driscoll’s resonant voice and direct tone are reminiscent of noir fiction - which is perfect for a mystery that unfolds when Shoes discovers a dead body and a friend from high school asks for help identifying her stalker. Though her voice has a feminine quality, Driscoll’s even delivery keeps the hard-boiled detective sounding cool and level headed in the toughest of situations, including Shoes’s attraction to policeman and ex-boyfriend Chance Parker. In addition to convincing voices and accents for other characters, such as Shoes’s Latino father and an Indian landlord, Driscoll dons a gravelly tone for Shoes’s Jewish mother. Chava’s straight-shooting comments add humor and moments of tenderness to an enticing story that puts a unique spin on a classic detective genre. (AudioFile Magazine)